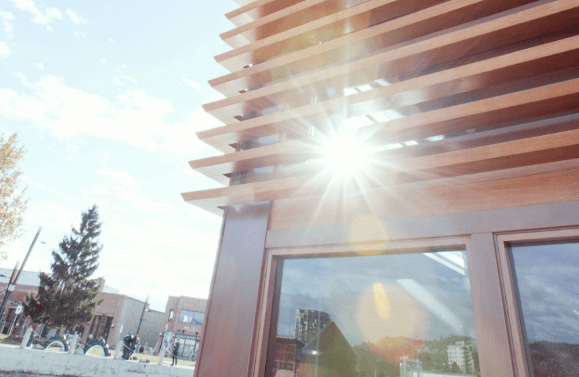 In this month’s Architect Focus, we’re showcasing some of our favourite Accoya projects around the world.

Designed and built in 1857, the historic Montefiore Windmill stands on a hill, opposite the Western city walls of Jerusalem. After being static for more than a century, the structure was restored in 2012 as part of the 60th-anniversary celebrations for the founding of Israel.

The restoration project was contracted by joiner, Bouw en Molenbouw Bertus Dijkstra Vof from the Netherlands who specified AccoyaⓇ wood for the new sails due to its durability and stability. The mill now turns in the wind again and is able to grind flour, while the main building serves as a popular site for education and tourism. In a mission to “create a building that will stand the test of time”, Danish Architecture practice, 3XN, specified around 250 cubic metres of high performance engineered AccoyaⓇ to clad the semi-transparent glass façade of the Royal Arena building in historic Copenhagen.

The glazed oval structure was then topped with decorative AccoyaⓇ fins of varying lengths to create an eye-catching waved pattern. The large arena hosts a variety of performing arts, sporting and musical events with an audience capacity of 15,000. AccoyaⓇ was specified for the restoration and rebuild of the existing traditional townhouses, as well as the development of a new 4-storey building to the rear where the material was used for the external cladding and window panels.

Specified for its extreme dimensional stability, colour retention properties, and resistance to weathering, AccoyaⓇ was further utilised by Morgan McDonnell for their own office building as part of a 16th Century restoration adjacent to Edinburgh castle. The above examples demonstrate how Accoya® is specified by architects all around the world for many different types of buildings and projects. One of the reasons this engineered timber is such a popular building material of choice is due to the fact it is dimensionally stable and holds a class one durability status that exceeds most hardwoods. It’s also renowned for being an environmentally friendly material that does not rot, shrink or warp, meaning it not only looks better for longer but it also requires less maintenance over time.

At Westbury, we celebrate the use of Accoya® as a material and use it as a core component for our garden room, window, and door products because of its amazing benefits.