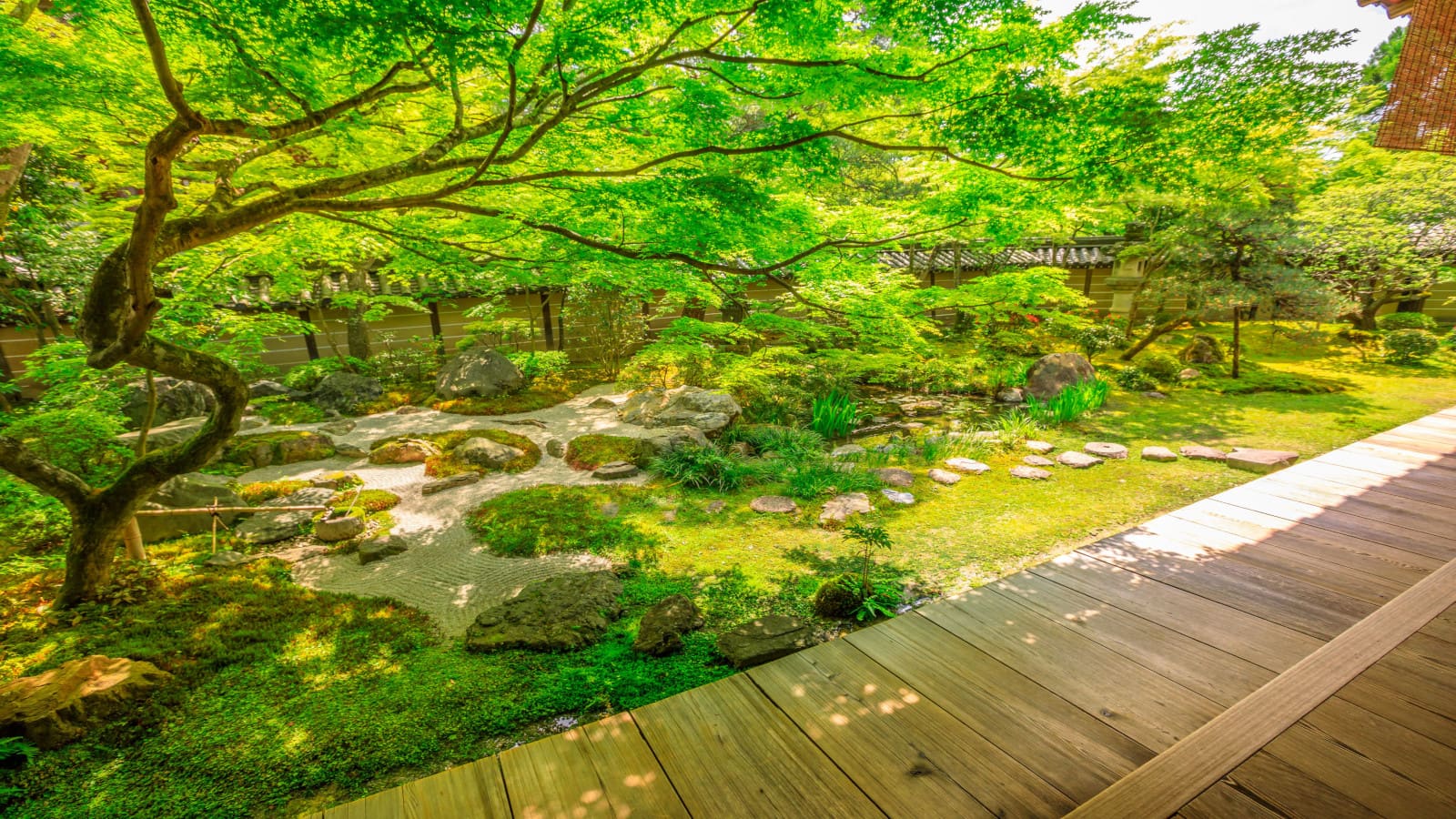 While they’re admired for their beauty and simplicity, there is so much more to Japanese gardens than neatly cut shrubs and stone statues. We explore the many symbolic elements and compositional concepts behind a traditional Japanese garden so you can recreate your very own oriental hideaway at home.

Across Japan, all gardens are significant and are treated with great respect, no matter their style or size. Garden design is a concept steeped in tradition, reflecting ancient spiritual beliefs that appreciate and worship nature’s delicate and complex beauty.

At its core, a true Japanese garden should encapsulate the very essence of nature, while highlighting the seasonal changes and the transience of life. If done correctly, an authentic Japanese garden is believed to tempt the deities down from heaven and draw them to an idyllic space, encouraging them to spend time in closer proximity to humankind. 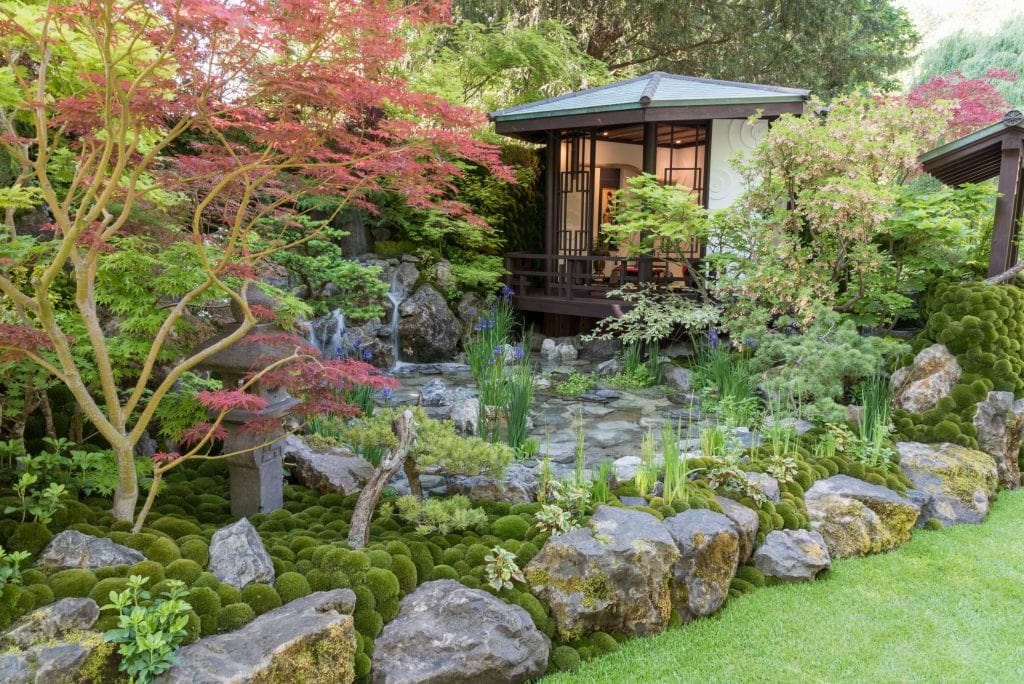 Credit: Tim Sandall via The RHS

Following on from Japan’s first introduction to the rest of the world in 1854, it only took 30 years for its tantalising and exotic culture to be the height of fashion. Demand for all things Japanese increased, including their beautiful and calming gardens, and it wasn’t long before the Brits tried to replicate them on their own soil. Gauntlett’s Nursery in Surrey was one of the first to specialise in plants and ornaments from Japan and as a result, quickly became a household name.

Today the Japanese-style gardens in Britain are extremely diverse, ranging from carefully considered replicas to casual gardens that give a nod to Japan with the addition of a stone lantern, bridge, or plant.

On first viewing, it might seem that a replica garden is well constructed but more often than not, they simply copy the look of a Japanese garden without the traditional nuances and concepts that can leave the design feeling flat and soulless.

It’s not an easy style to achieve, but those brave gardeners who get it right are rewarded with an astoundingly elegant, eye-catching garden. Some experts will say it’s almost impossible to summarise the complex design concepts behind a Japanese garden. As a starting point, you can consider some common themes:

Reflecting nature in all its glory

In Japan, a garden will fit into one of two distinct categories: gardens that you walk around and gardens that you view from a building, tea house, or veranda. Whatever landscape you are trying to create, the purpose is to create a garden that perfectly copies and imitates nature, using plants and natural elements to make a space that looks exactly like the landscapes you might stumble upon in the wild, just on a smaller scale.

‘Shakkei’ is a Japanese concept commonly used in gardens, using techniques that incorporate elements from the outside world into the garden. It is a way of playing about with perspectives and using an external view or feature to give the illusion that the garden extends well beyond its real boundaries.

Where the garden is supposed to be a microcosm of the greater world beyond, by default the elements embodied within the garden are smaller versions of what lies beyond the garden walls. Magnificent mountains, lakes, and forests are represented on a smaller scale with boulders, ponds, and bonsai trees. 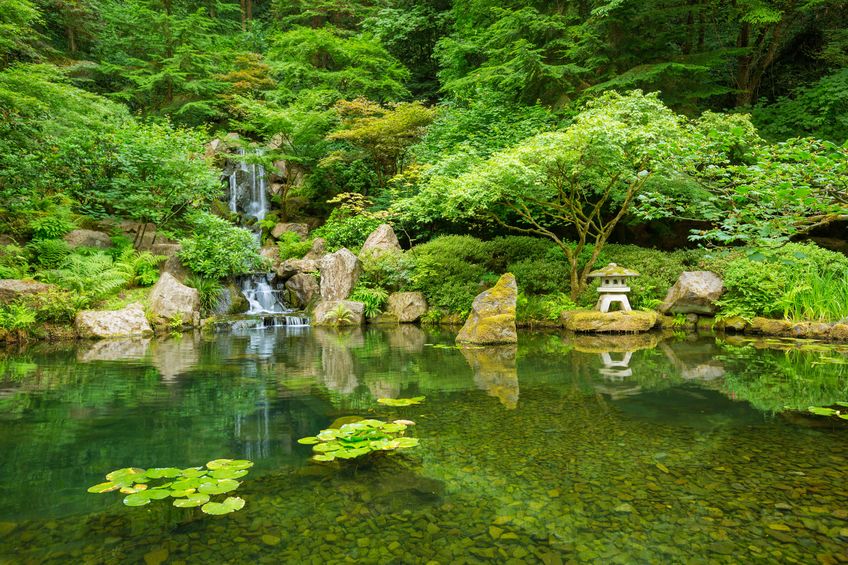 In authentic Japanese gardens, symbolism is at the heart of the composition, with references made to many mythical ideas and concepts. Water represents renewal, calmness, and continuity. Gravel pathways and bridges help guide the body and soul. Stone represents strength and endurance, and the power of nature. Pagodas and garden structures represent spirituality and religion, as they are smaller replicas of temple architecture. These symbols tell a story and create meaning through the garden.

Interestingly, the term for ‘landscape’ in both Chinese and Japanese is a combination of the ideograms for san, ‘mountain’ with sui, ‘water’. This isn’t surprising, as stone and water are two integral elements in a Japanese garden. 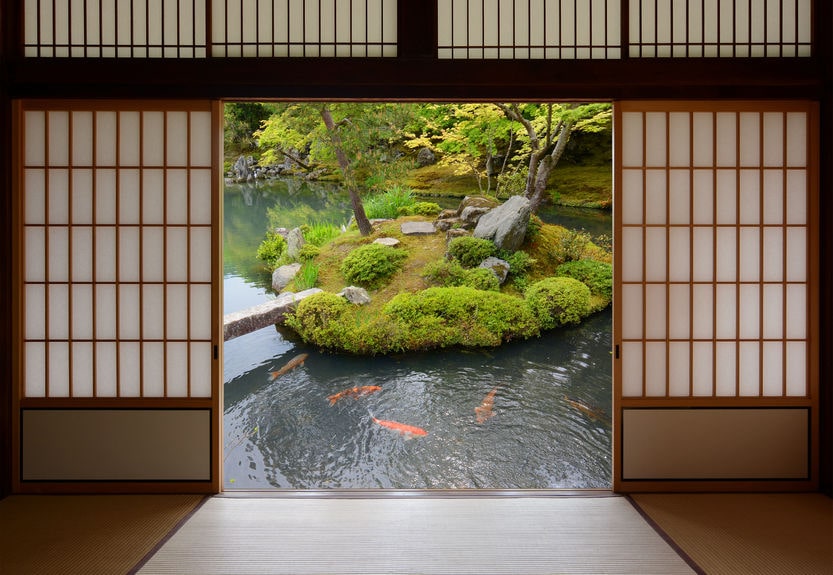 It’s believed that the Universe is composed of two opposing, but complementary forces (yin and yang). The interaction of these fundamental forces creates energy and movement. In gardens, yin is represented through water, either still or flowing, and stone is an expression of yang.

A Japanese garden will appear to have a relatively humble and uniform planting scheme, predominantly using evergreen plants and bonsai trees. On further inspection, the subtle shades of green and layers of texture become more apparent, revealing a clever design that took a lot of skill and knowledge to create. Traditionally bright colours are used in a concentrated, specific manner to highlight seasonal changes, for example, orange in autumn or pink in spring. 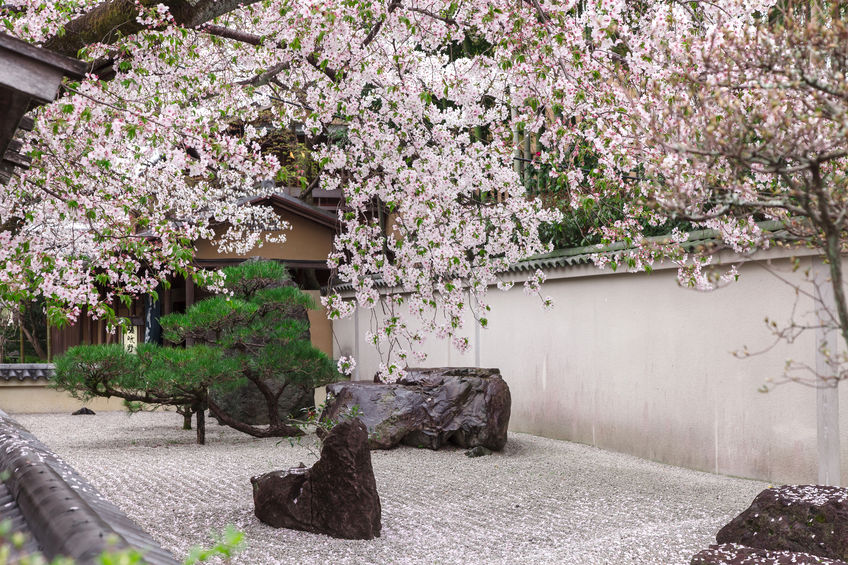 Plants are ultimately seen to represent lifeforms and the natural world. Green acer trees, sturdy bamboo, and cherry trees are ideal for bringing these elements into your Japanese garden design. Blossom is a particularly celebrated tree which highlights the fleeting nature of beauty and new beginnings.

Whether traditional or modern in style, Japanese gardens are very dependent on a meticulous maintenance routine, which is something that they would get on a regular basis in Japan.

Many Japanese-style gardens in Britain suffer in this regard, due to a lack of understanding of the care and skills required. Jake Hobson, the founder of UK-based company, Niwaki, specialises in Japanese niwaki pruning and contemporary Japanese cloud pruning. Originally studying in Japan, he writes and lectures on the subject around the world and exhibits at the most prominent flower shows. From his perspective, trees in Japanese gardens should be pruned in a way that defines or exaggerates the character of a tree, to help the tree to maintain its true essence. 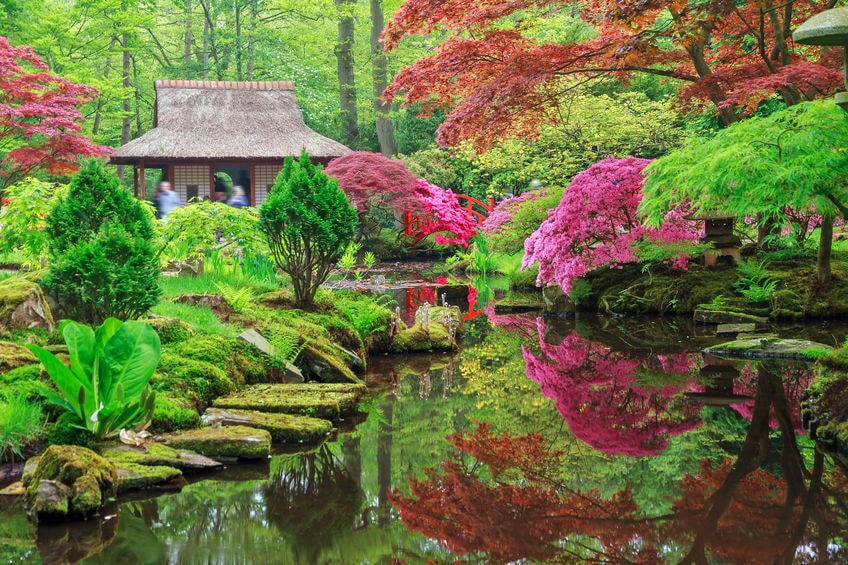 If you’re interested in finding out more, then the UK Japanese Garden Society is a great place to start. This passionate group brings together people interested in the gardens of Japan, welcoming amateurs, professionals, garden lovers, and garden designers who are interested in the practice and wish to connect with like-minded people.

The society also runs talks, garden visits, and workshops for their members, and the public are welcome to join. Look at their Diary of Events for more information. 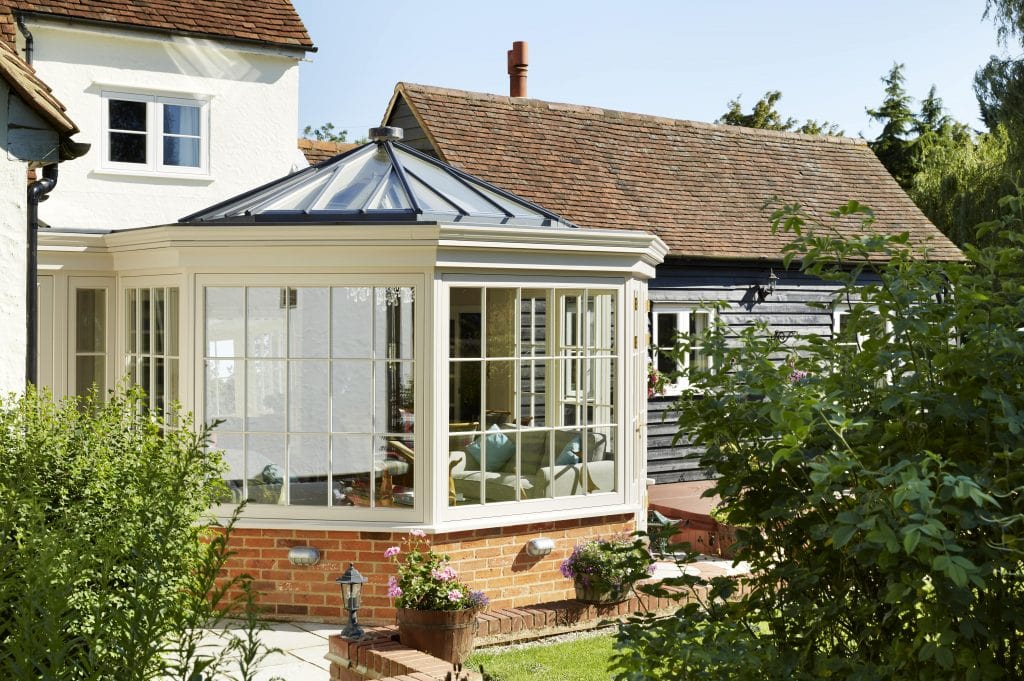