Plant of the month: Mistletoe 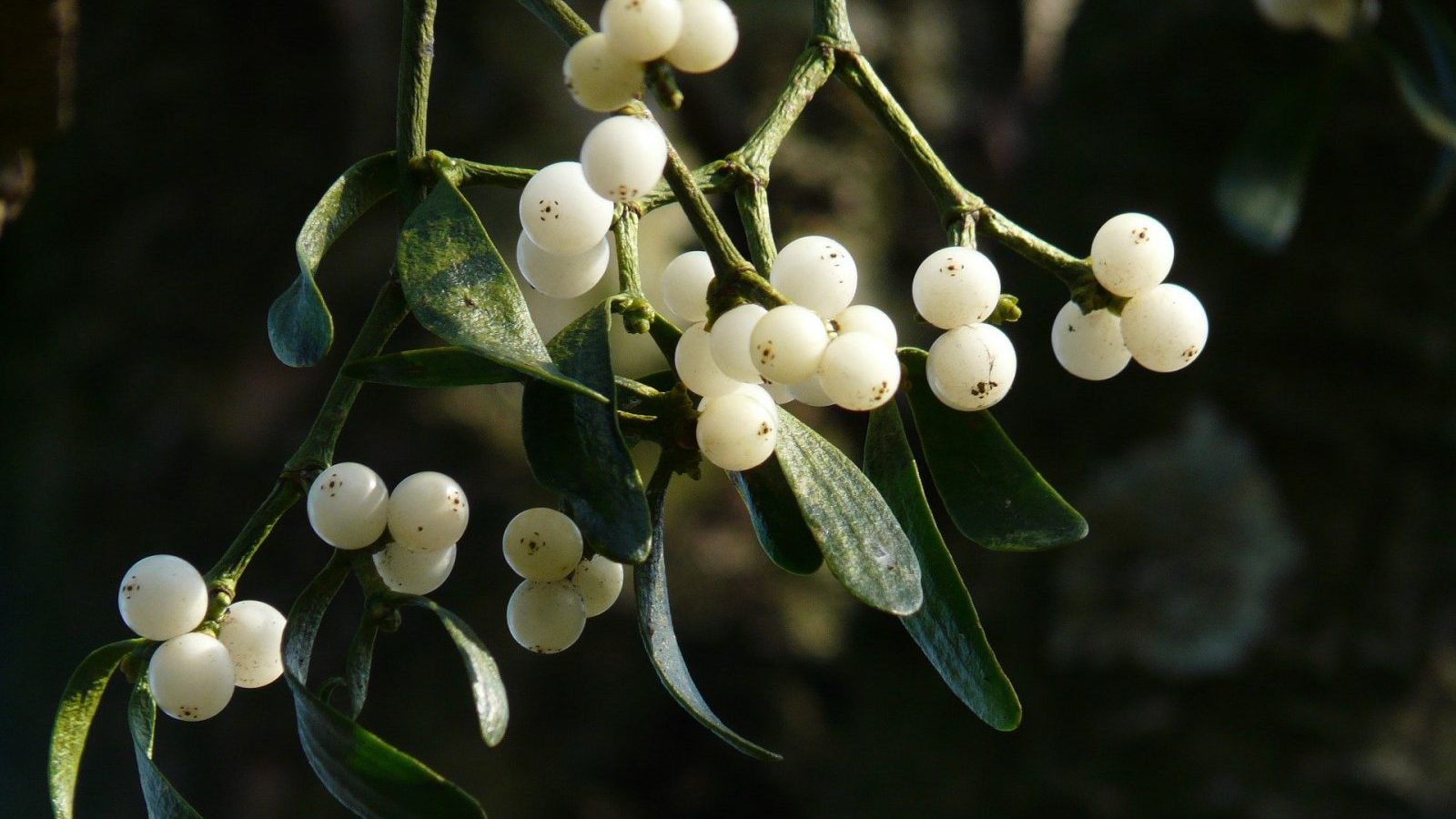 This month we look at the Mistletoe plant! Considered a symbol of vitality by many cultures for millennia, this evergreen plant brings life to your garden even in the midwinter.

A well-designed garden should aim to have some plants in bloom no matter the time of year. In the British winter, most of our plants lay dormant and the garden becomes a rather inactive place, perhaps except for the odd afternoon here and there when we plant spring bulbs. However, when the deciduous trees shed their leaves and the boughs become exposed, bundles of evergreen leaves and white berries are revealed. They become a common sight across the British countryside throughout winter until spring.

Viscum albums, the native species of mistletoe in the UK, is an ideal plant to bring some decoration to your midwinter garden. Save the Christmas tree itself, what could be a more iconic Christmas plant than a sprig of mistletoe hanging over your front door?

A symbol of vivacity, peace and fertility

Mistletoe is a hardy, hemiparasitic shrub steeped in mythology and tradition. Some claim that the Celts believed mistletoe, particularly the rare species that grew on their sacred oaks, to have magical properties; from curing illnesses to predicting the future. Attributing its ability to remain green throughout the winter months, they considered mistletoe as a symbol of vitality. 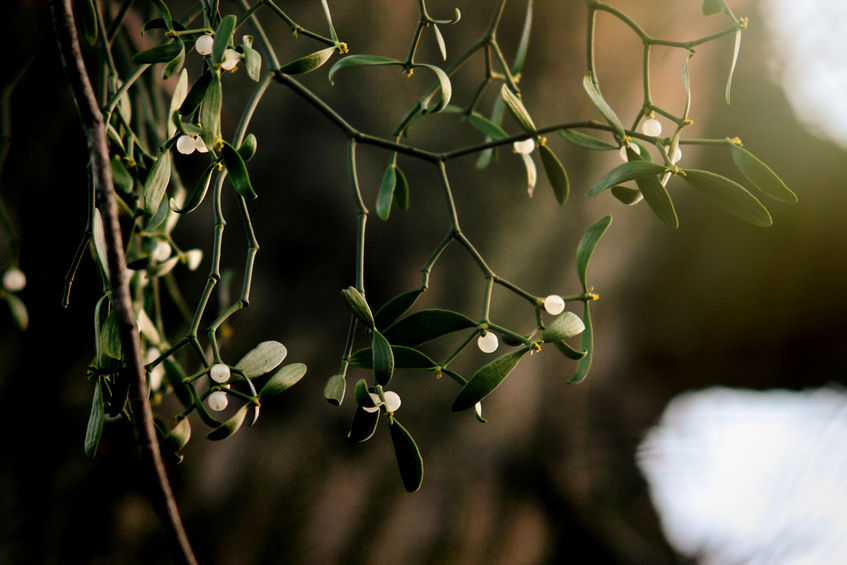 Such was its importance to pagan ritual, Druids (Celtic priests) would cut the mistletoe branches from their host tree using a golden sickle and catch the harvested mistletoe in cloth, lest the sprigs touch the ground and lose their powers.

Why do we kiss under the mistletoe?

The origin of kissing under the mistletoe at Christmas is unclear. It is sometimes attributed to the ancient Greeks, who believed that the mistletoe promoted fertility and would kiss under the plant during Saturnalia, the precursor to Christmas. The Romans that followed associated mistletoe with peace, love and understanding. They would hang the mistletoe over doorways to protect the threshold and warring foes would make peace with each other under the plant. 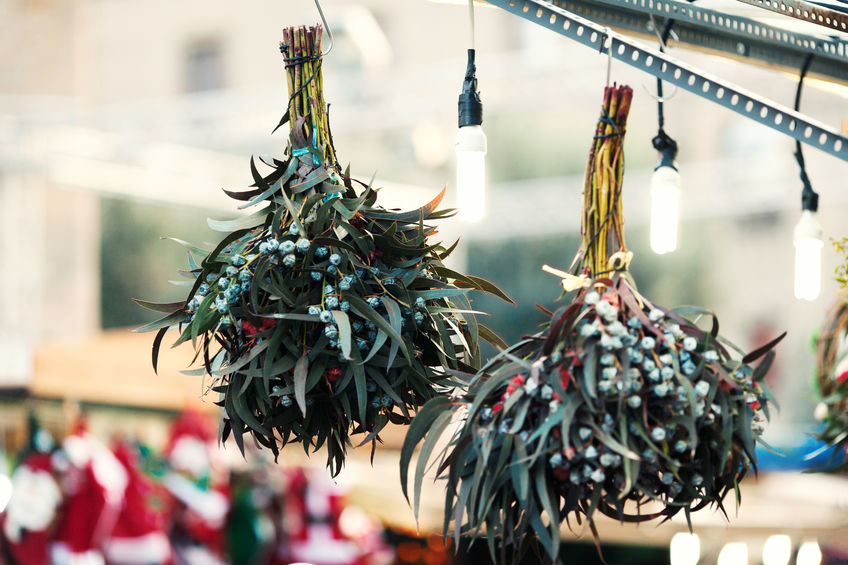 One of the more popular stories is from Norse mythology, which tells of how Loki – the trickster, fashioned an arrow out of mistletoe and tricked the blind god Hod to kill his brother, Baldr ‘the Beautiful’ with it. The tears of his mother Frigga, transformed into the white berries on the wood. In the happier versions of the story, Frigga revived her son and decreed that all who stood under the plant deserved a kiss.

The tradition could have originated from any of these cultures, but it is likely to have been revived in Britain during a druidic renaissance in the 18th and 19th centuries.

How to grow your own mistletoe

In the UK viscum album grows best on hawthorn, apple, poplar, lime and conifer trees. In nature, birds who eat the berries then deposit the seeds in crevices of a tree’s bark help to spread the seeds. If you are growing your own mistletoe, rather than hoping for nature to take its course, the best time of year to sow the seeds is in March or April. 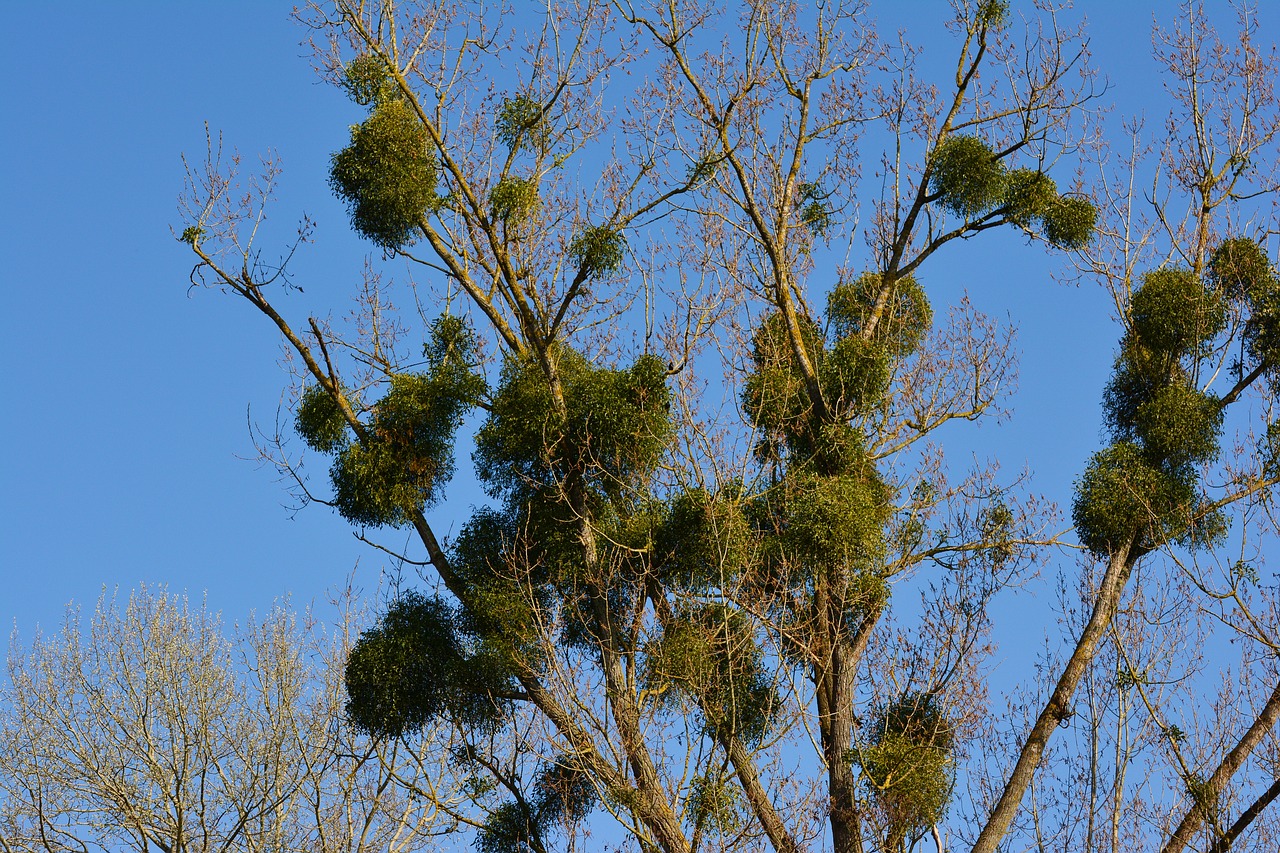 For best results, harvest your berries from mistletoe growing on a similar type of tree you hope to grow it on. Saving the berries from any Christmas decorations will not likely work. Transplant the seeds into a branch that is at least 10 cm (4 inches) in circumference, on a tree that is 15 years old or more. Mistletoe is partially parasitic and takes water and nutrients from its host tree but it will still need to photosynthesise, so an area with plenty of light is essential.

Remove the seeds from the harvested berries and push them into natural cracks in the bark, alternatively use a knife to carefully cut a flap in the bark and insert the seeds within it. Only 10 % of seeds will germinate and to ensure your mistletoe grows berries, you need both male and female plants. Therefore, it is wise to place a number of seeds in each crease or flap. Cover with hessian material to prevent birds from eating the seeds.

Mistletoe, once germinated will take up to five years before berries begin to appear. During those initial years, the plant will require little care; however, after five years, the mistletoe will need pruning from time to time so that both it and its host remain healthy.

Five years may seem like a long time, but to have this stunning and revered plant adorn your winter garden will make the wait worth it. What would be lovelier than opening up your French Doors to your garden, picking mistletoe to hang at your Christmas party and celebrating life, peace and perhaps fertility with your friends and family?