Roof lanterns of the world 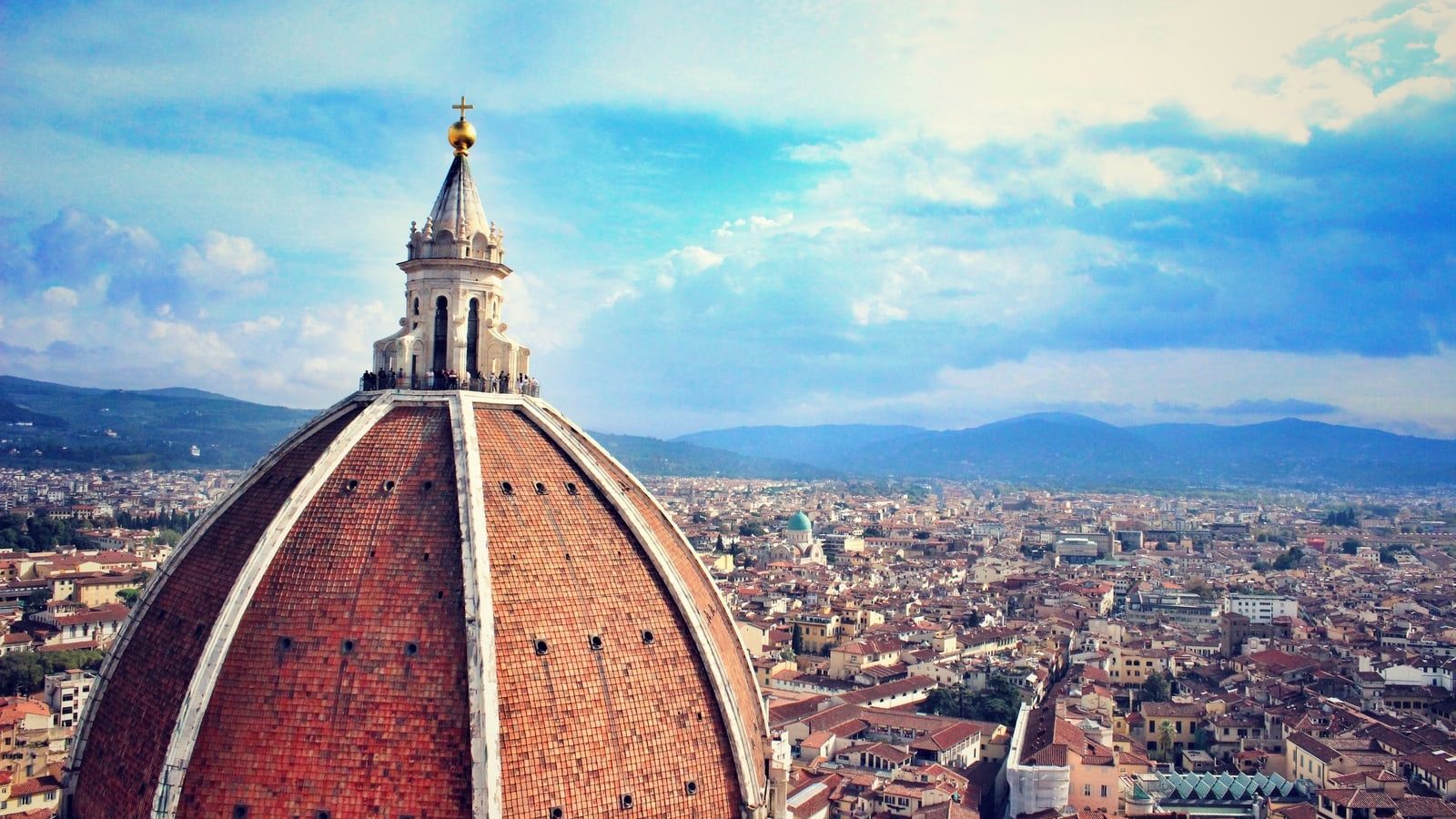 A well-designed roof lantern can transform a dark and gloomy room into a bright and airy space, making it the heart of any home. These elegant architectural features have been used in a variety of famous and iconic buildings, so we’ve compiled a list of the most inspiring roof lanterns from around the world…

While it was the Romans who used large openings in their roofs to let in the sunlight, the concept of using glass-panelled lanterns didn’t come into architecture until the Middle Ages. Back then, glass was a tricky material to work with, so it was reserved for more exclusive buildings like cathedrals and castles.

Over time, glass production became more efficient after the invention of lead-based glass in the 1670s. Roof lanterns became increasingly popular in Renaissance and Baroque architecture, particularly in buildings that demanded a sense of grandeur. The elite classes in France and Italy loved to fit timber-framed roof lanterns in their orangeries so the citrus plants could benefit from the warm rays of sunshine streaming in from above.

Moving forward to the Victorian era, the roof lantern sees another boom in popularity. One only has to refer to The Great Exhibition in 1851 to see how much the Victorians adored elaborate glazed structures. Developments in industrial manufacturing meant that larger panes of glass could be made, and the expansion of the rail networks meant that these delicate materials could be transported further afield. Victorian fascination with Gothic and Italian architectural styles made it a popular trend, and the relaxation of the window tax resulted in roof lanterns being used excessively in all kinds of buildings, from grand estates that benefitted from extra pomp with a few cupolas to cramped, urban dwellings that needed extra light. 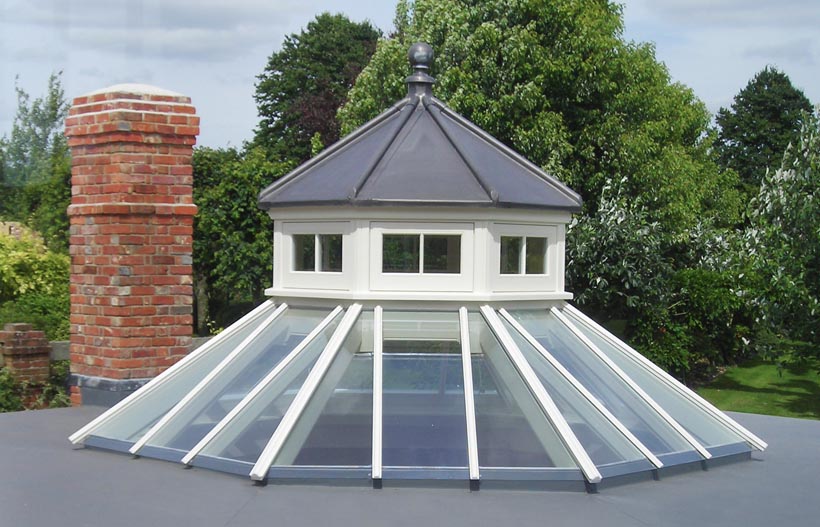 Today, roof lanterns are crafted using quality glazing and advanced joinery techniques, resulting in a durable and long-lasting structure that can completely transform the look and feel of a room.

The legacy of the roof lantern’s fascinating history remains to this day, with an array of spectacular glass roofs and lantern structures that can be found across the world… 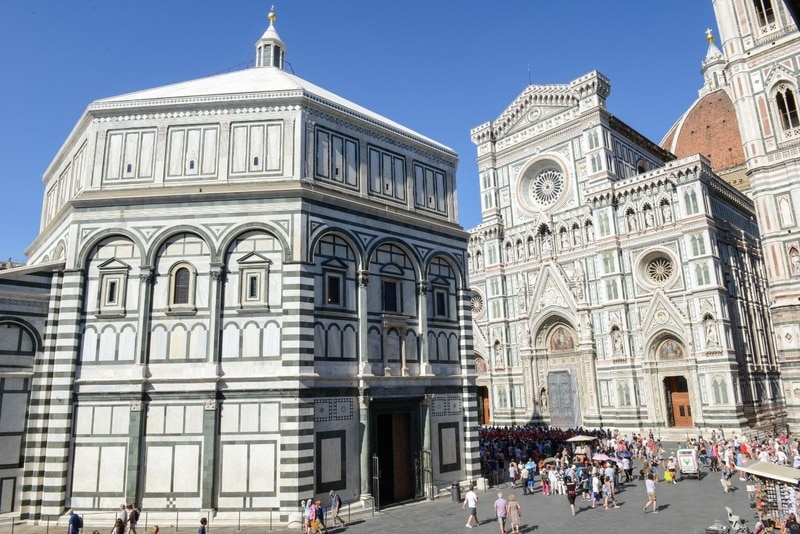 One of the oldest buildings in Florence, the Baptistery of Saint John has an octagonal lantern and cupola, which was added to the building in 1150. The octagon had been a common shape for baptisteries since early Christian times. The number eight signifies the six days of creation, the Day of Rest, and a day of re-creation through the Sacrament of Baptism. Located right in front of the Cathedral of Santa Maria del Fiore, Dante described it as “my beautiful San Giovanni”. The Baptistery is also renowned for its ornate bronze doors with panels that depict stories from the bible, which are truly breath-taking. 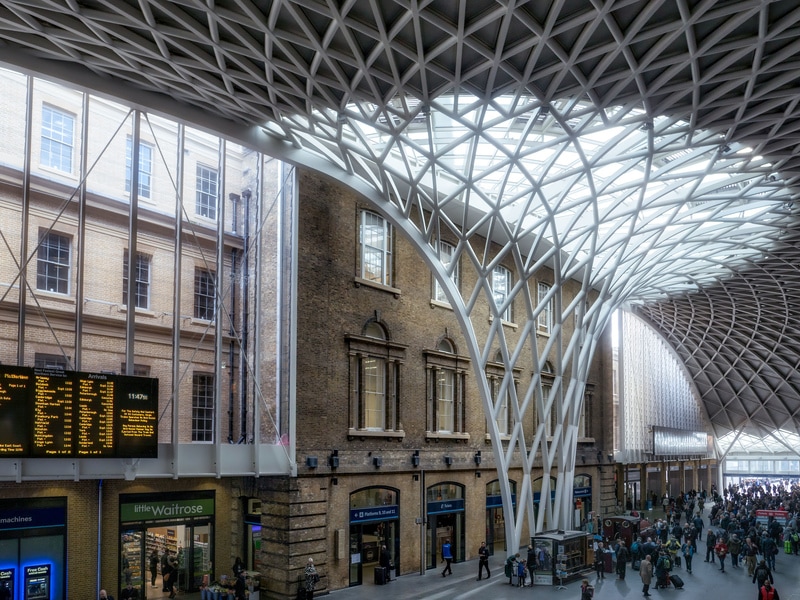 The semi-circular vaulted Western Concourse at Kings Cross Station was opened by Boris Johnson in 2012, just in time for the London Olympics. Designed to hold huge numbers of people flowing from platform to platform, the spectacular roof lets in plenty of light into the space below, with steel ‘stalks’ spreading out like the branches of a tree. 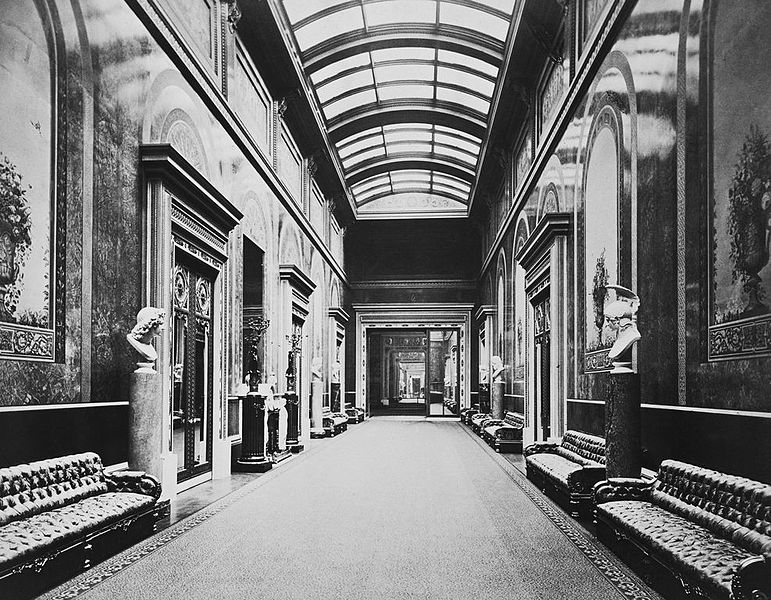 Originally known as the Promenade Gallery, the East Gallery at Buckingham Palace was designed for Queen Victoria by Sir James Pennethorne. With an elegant and simple domed glazed roof and relief plaques high above the door frames, it’s a timeless and well-known room full of heritage art. sculptures and furniture. Most notably, a collection of frescos by Nina Consoni are displayed in the gallery, which were acquired by Queen Victoria and Prince Albert. 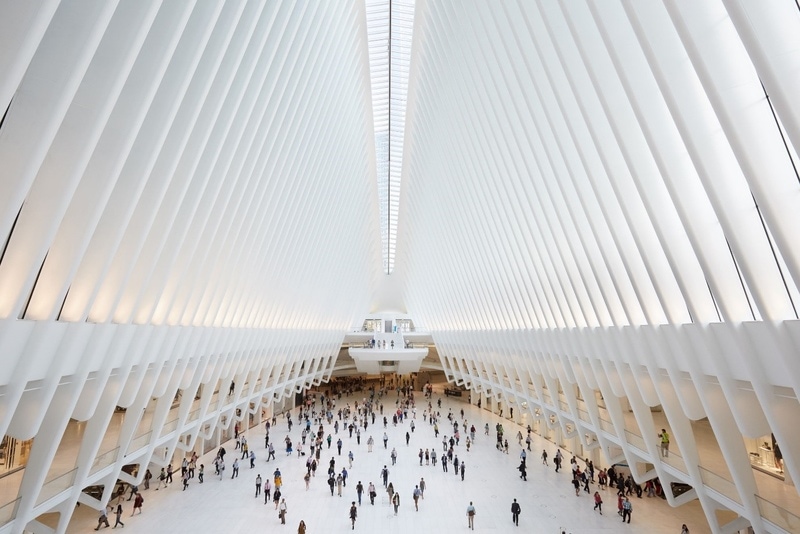 This monumental building is so much more than just a shopping centre. Built in 2016, it replaced the original mall which was destroyed during the September 11th terrorist attack. Located right next to the 9/11 Memorial, it’s a marvel of architectural design with a narrow glazed strip running right across the centre of the roof where the curved walls join. Visitors can’t quite agree on what they think the shape of the building looks like, but it’s an expansive space that stands proudly among the skyscrapers of Manhattan. 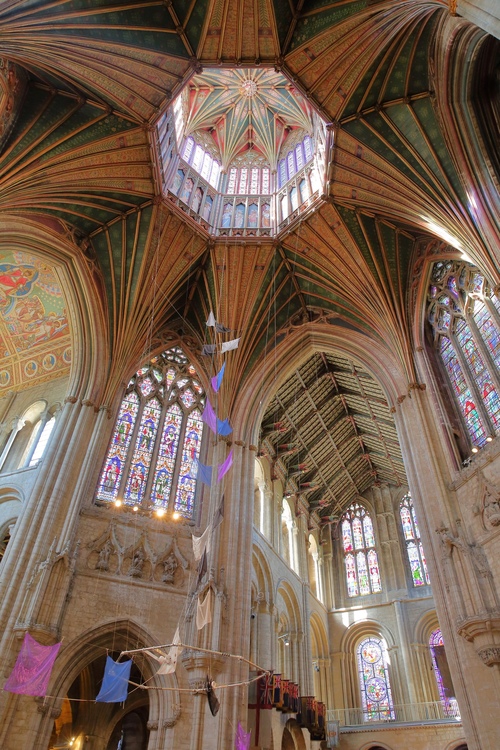 Ely Cathedral’s octagonal dome and roof lantern are a wonder of medieval architecture. With the very top of the roof lantern standing 43m high, the structure holds up 400 tons of stone, timber and lead. It took 18 years to build, and it was only because the original structure collapsed that it came to be built in the first place. It was said at the monk responsible for the building was deeply grieved and inconsolable over the disaster, but from that the idea of constructing a stronger, glorious octagon was conceived. 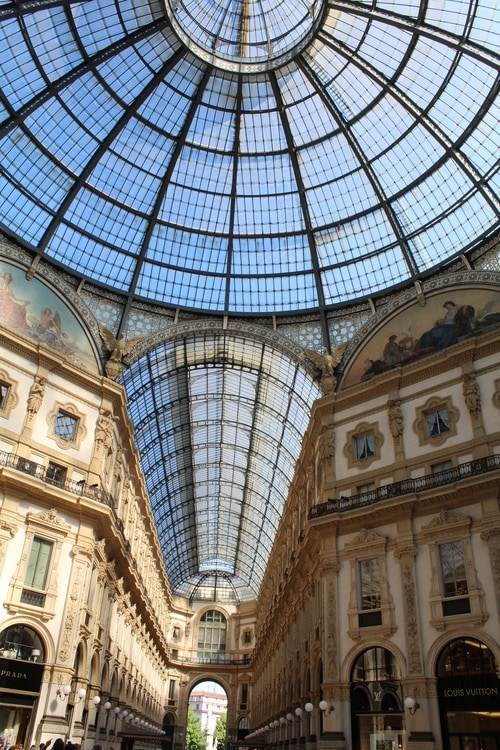 This is Italy’s oldest shopping centre, and it’s also a major landmark in Milan due to its distinct cast iron and glass-vaulted arcades. The arching structures are built over the street that connects Piazza del Dumo to Piazza della Scala, with an intersecting octagon in the middle. The central octagonal space includes a spectacular glass dome on the top. With its large dimensions and roof lanterns, this building was an important step in the evolution of the modern glazed and enclosed shopping centres, and has inspired the use of the term ‘galleria’ for many other shopping arcades. 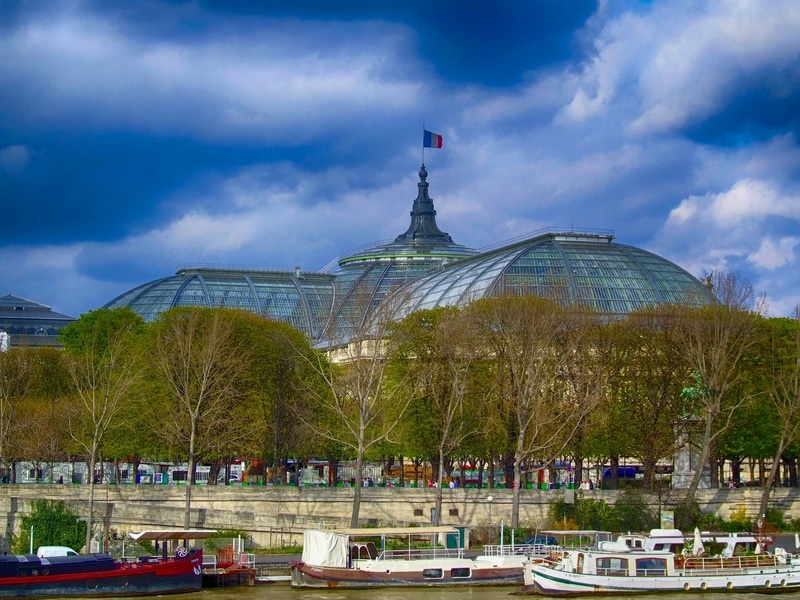 This astounding blend of glass, steel and stone is the creation of three separate architects, who all entered a competition to design the new building but the judges couldn’t decide on a winner, so they all got one section each to work on. The famous glass roof of the Grand Palais is known as the Nave, and with a 13,500 m2 floor area it’s the largest one of its kind in Europe. It has more steel than the whole of the Eiffel Tower and took three years to build. This was a rather tight deadline, as they were working hard to have it open in time for the Universal Exhibition in 1900, but they did it in time, and it’s been an iconic monument ever since. 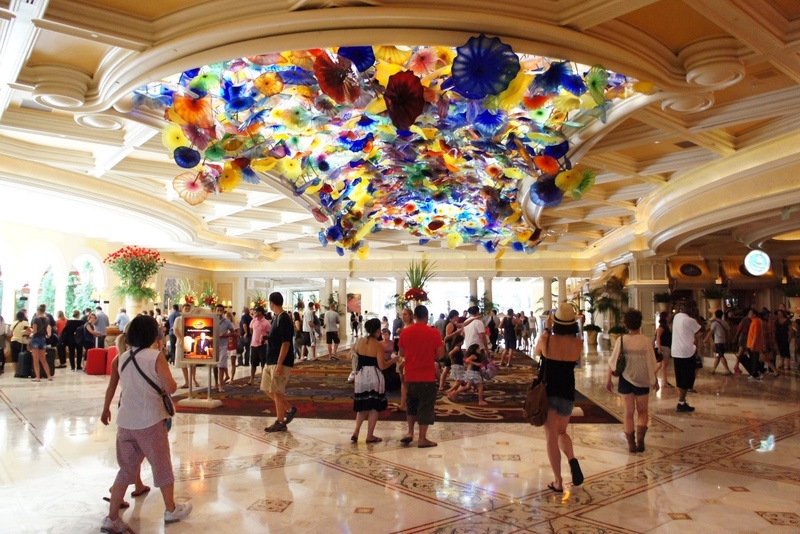 A one-of-a-kind roof that is ‘very Vegas’, this masterpiece of hand-blown coloured glass is installed in the reception lobby of the Bellagio Hotel, made by contemporary glass artist Dale Chihuly in 1998. Inspired by Italian flowers in the spring, it has over two thousand glass pieces suspended above the foyer. Each morning, a specialist team come to clean and maintain the structure and for good reason too; 15,000 to 20,000 people come to the hotel each day just to see the conservatory and the sculpture. 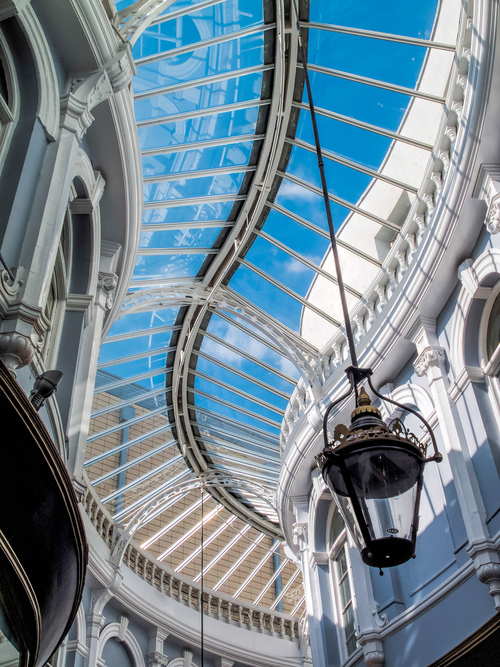 Another fantastic example of British architecture, this arcade was opened in 1899 in order to connect the main entrance of David Morgan’s department store on St Mary’s Street, with his other store on The Hayes. With an elegant, curved glass roof and timber balconies, it is a beautiful space to spend time in. Between 2007 and 2008 the whole site was refurbished, with some of the first-floor Venetian windows and original wooden storefronts still surviving. The Morgan Arcade is now described as the best preserved of Cardiff’s arcades, known for its boutique and artisan shops.

If you’re considering a roof lantern of your own then it’s important to take your time and choose the right style, as there are a wide range of options to choose from. Westbury Windows and Joinery have been designing and supplying bespoke joinery to homeowners and specifiers for over 30 years, using expert joinery techniques along with state of the art technology. 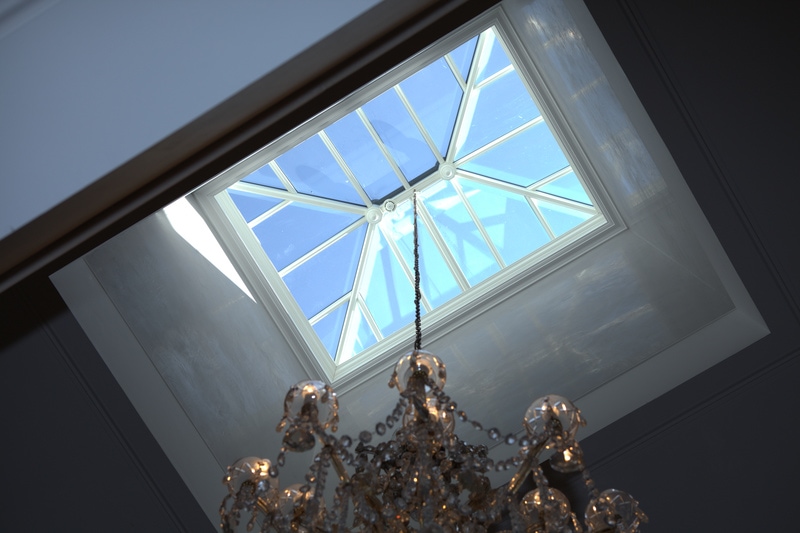 Click here if you’d like to discuss your requirements in more detail with a consultant or request a brochure.

Request a Quote for a Westbury Roof Lantern

Request a Quote for a Westbury Roof Lantern