Tree of the month: Cherry 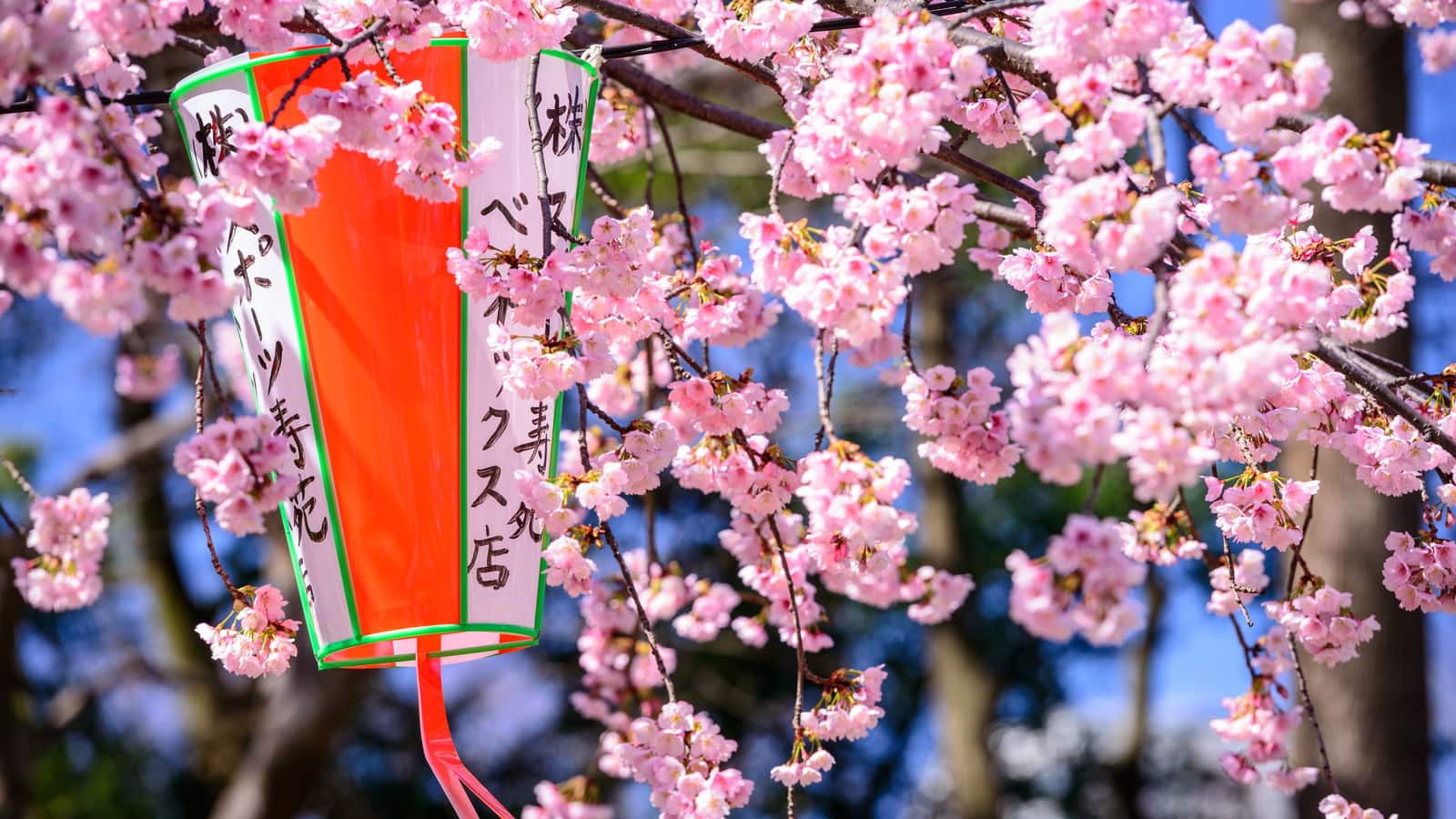 This month we take a look at the cherry tree! The season of spring is upon us, bringing with it an enchanting natural displays as cherry trees across the country bloom with pink and white blossom. This is not just a tree for springtime however; it has a range of other uses too…

No tree conjures up images quite so charming and sweet as the cherry tree. Belonging to the Rosaceae family along with almonds, peaches, plums and apricots, it is the most impressive tree among its relatives, regularly reaching 20m or more. There are many varieties growing across the world, ranging from Europe to North America and Asia. 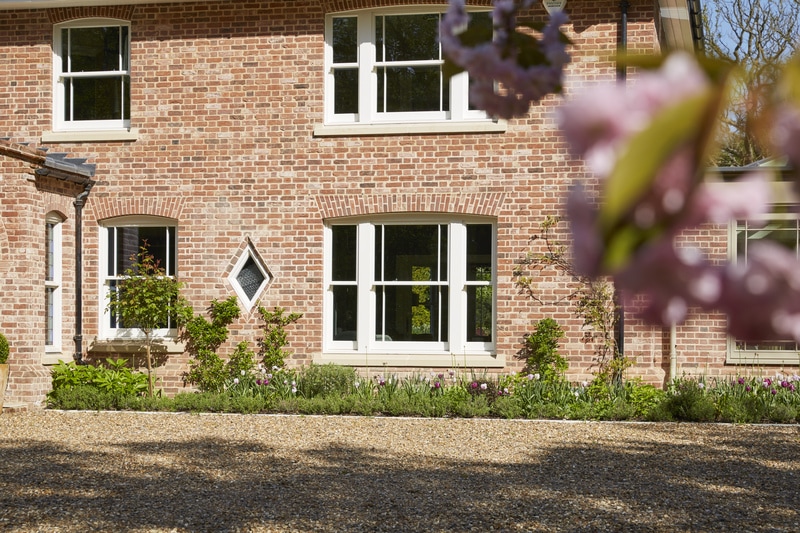 With its purple-grey, shiny, peeling bark and drooping green leaves, it can be a beautiful addition to your garden all year round. But it’s in the early spring when the cherry tree comes into its own, with buds blooming into dainty, long-stalked, cup-shaped blossoms and the leaves coming soon after, resulting in a colourful display. 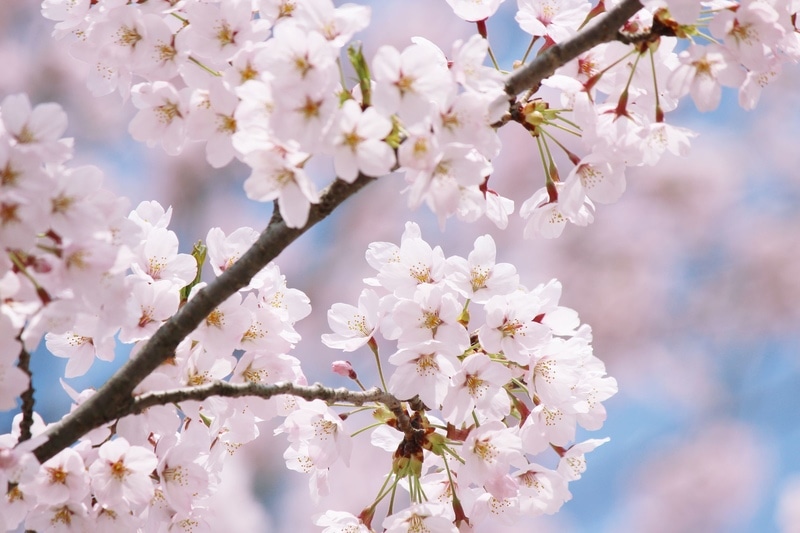 Depending on the species, cherry blossoms comes in a range of pink and white colours. Some varieties of the tree such as Kanzan are just grown purely for their aesthetic beauty, and usually have no reproductive function at all. Instead of stamens and pistils, these trees have extra petals which are known as double flowers and are spectacularly decorative.

Down the garden path…

The best landscape designers know that a garden scheme needs to include plants and flowers which will bloom and change colour at alternate times of the year, ensuring that the garden will continuously look good during the different seasons. 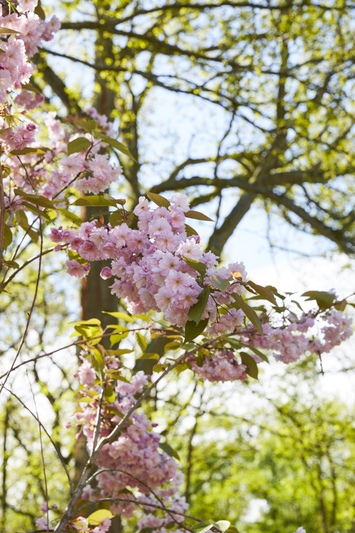 To bring a splash of colour before the summer plants bloom and take over, designers will often use bulbs such as crocus, hyacinth and bluebells which are easy to plant and typically flower during the spring. 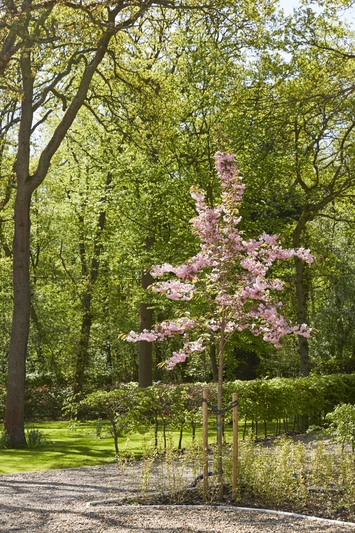 But cherry trees are also a wonderful feature in a spring garden and can be used to great effect, like in the ‘Garden For All Seasons’ by award-winning designer Kate Gould at the 2018 Ascot Spring Flower Show. Kate used grey porcelain wood effect paving, sustainable bamboo decking, corten steel panels and a pergola to beautifully contrast with the soft pink blossom. 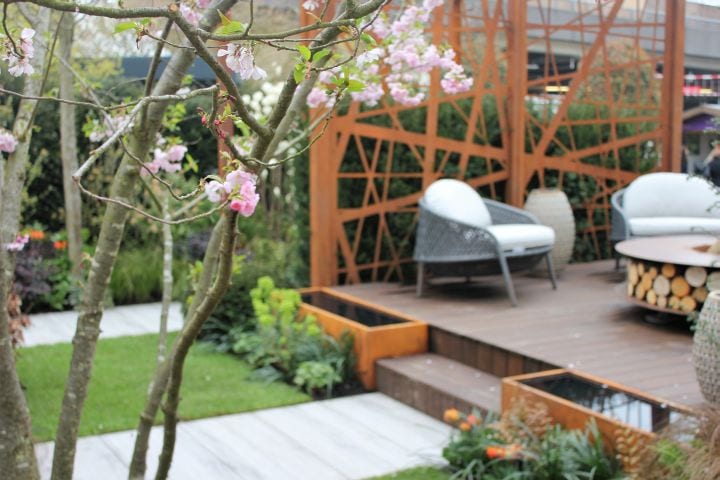 Life is just a bowl of cherries…

Eventually these delicate little flowers drop, scattering pavements and gardens with natural confetti, and the familiar cherries begin to ripen in July. There are two types of fruit: sweet and sour. The sweet fruit is best for eating raw, and the sour cherry is best used in cooking and jam making. If you want to grow cherries in your garden, you’ll only be able to have either a sweet or a sour variety as the two varieties don’t cross-pollinate each other.

Cherries start as small, yellow fruits before turning bright red and then dark, purplish-red. Although you don’t tend to see the cherries too often, as they are a favourite with the birds who will usually peck the trees bare. Occasionally, in some seasons the sweet cherry trees will lose much of their fruit before it has time to ripen, known as cherry fruit drop or run off. In severe cases, whole cherry crops can be lost. 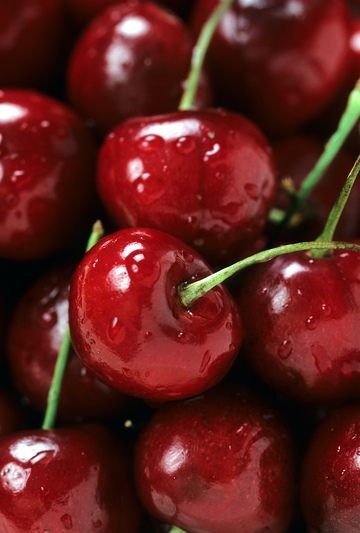 Cherries are an indulgent and healthy fruit that can be eaten fresh from a bowl one by one, used to glaze meats or baked in puddings and cakes. 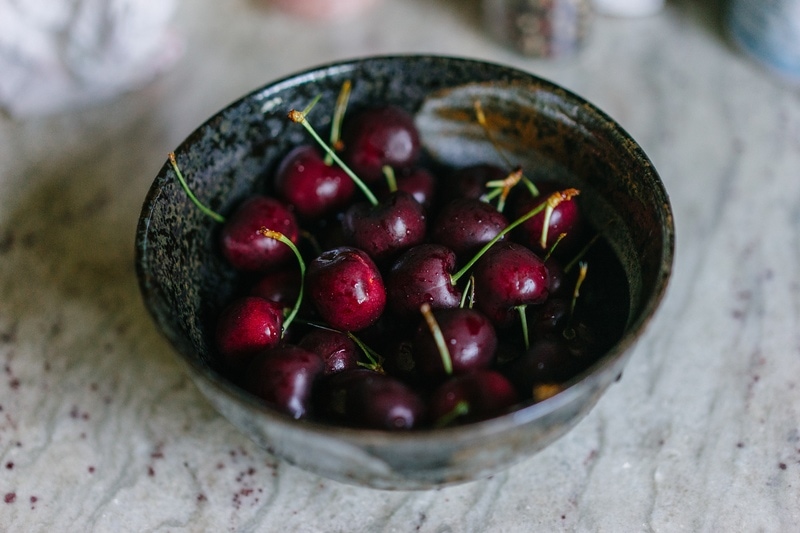 Their slightly sour, distinctively sweet flavour is ideal for livening up sponges, tarts and pastries such as a classic bakewell pudding or hot cherry pie with custard. For more cherry recipe ideas, visit the Great British Chefs website. 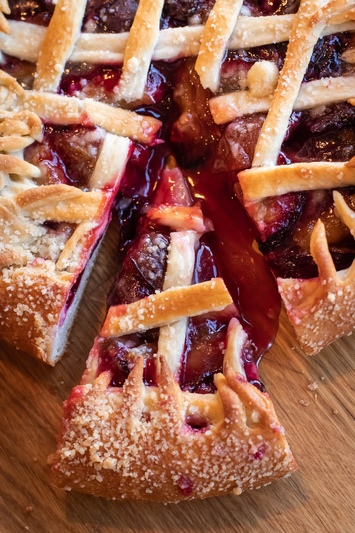 Wood as a material

Highly sought after by both professional crafters and homeowners alike, cherry is a timeless material that is easy to work with and becomes darker and richer with age. With reddish brown and golden hues, when freshly cut the wood is paler but oxidises over time. It has a straight grain with a fine, satin-smooth texture and a natural lustre, making it ideal for elegant furniture and veneer panels. 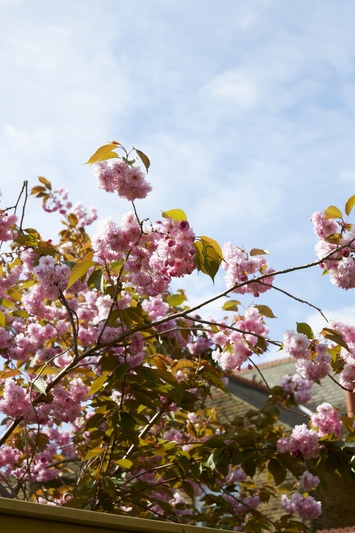 Because of its straight-grained qualities, cherry is known for its great workability and is easy to cut, carve and mould. It’s a moderately durable hardwood material which is particularly resistant to rot and decay. While it can become blemished when it is being stained, it’s often prepared beforehand and a sanding sealer or a gel-based stain is recommended.

Along with Apple wood, cherry is one of the most popular materials for smoking in BBQ’s and gives a sweet, mild flavour to fish, poultry and meat.

Most people will simply appreciate the cherry blossom season for what it is, but the people of Japan celebrate it as a national party. There are over a hundred cherry tree varieties across Japan and Hanami is one of their most ancient festivals. Steeped in tradition, Hanami means ‘flower viewing’, and this special practice usually involves picnicking under the entrancing cherry blossoms to feast on delicious food and drink either tea or sake. The spectacular coming of the blossoms signifies the beginning of spring, and the Japanese begin to make plans for their parties and picnics weeks before the flowers bloom in anticipation. 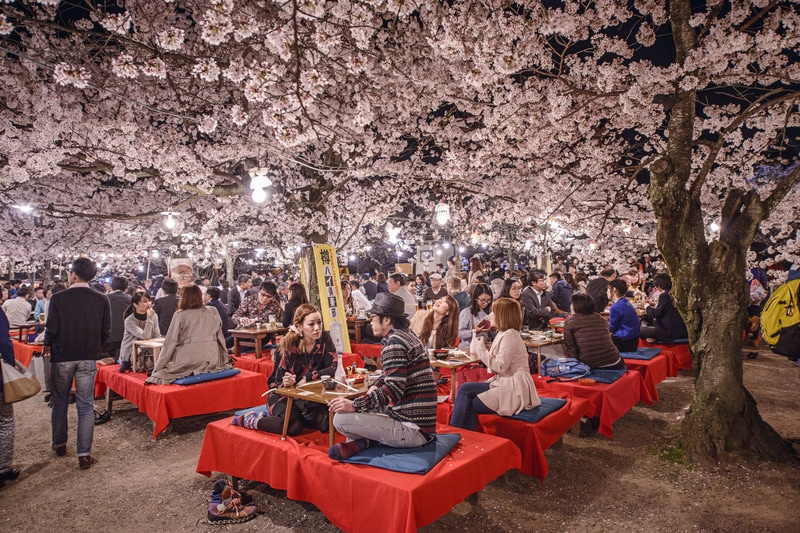 Hanami is top of the travel aficionado’s bucket list, with parks and public spaces across Japan brimming with people all showing their devotion to the cherry blossom. With the festival dating back to the eighth century, it originally focused on plum blossoms, which bloom slightly earlier in the year, but then switched to cherry blossoms during the ninth century reign of Emperor Saga. Flower-viewing parties were held under the trees of the imperial court in Kyoto where inspired aristocrats wrote and recited poems.

‘How many, many things
They call to mind
These cherry-blossoms!’ – Haiku by Basho Matsuo

Gradually spreading from the court elite to the samurai, eventually Hanami became popular with the rest of the country and soon became an annual tradition. Today, most people head to local parks for outdoor parties, with the most coveted of picnic spots taken early and guarded during the day. 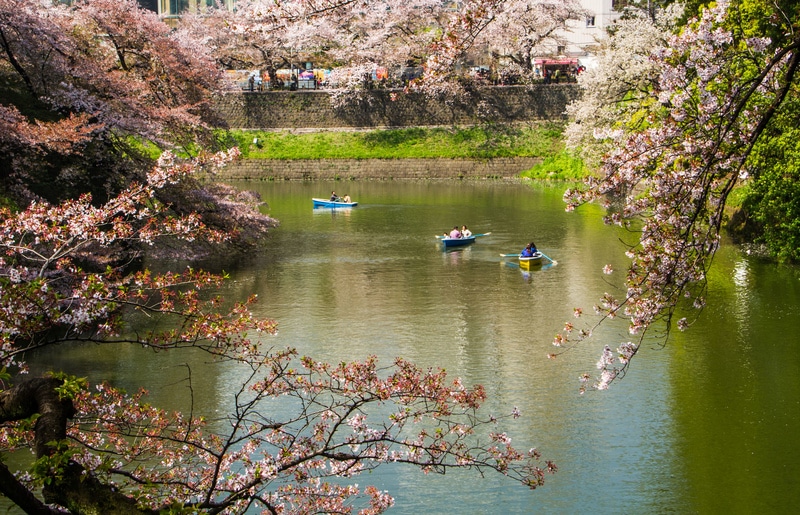 Relaxing boat trips along rivers and waterways where blossom blooms along the banks is also a popular tradition. Many will gather at famous viewing areas and scenic spots such as castles, temples and shrines, or enjoy visiting particularly famous cherry trees.

You don’t have to live in Japan to take part in this amazing festival – here are some of the best spots in London to go and appreciate cherry blossom in all its natural beauty.