Tree of the month: Common Ash 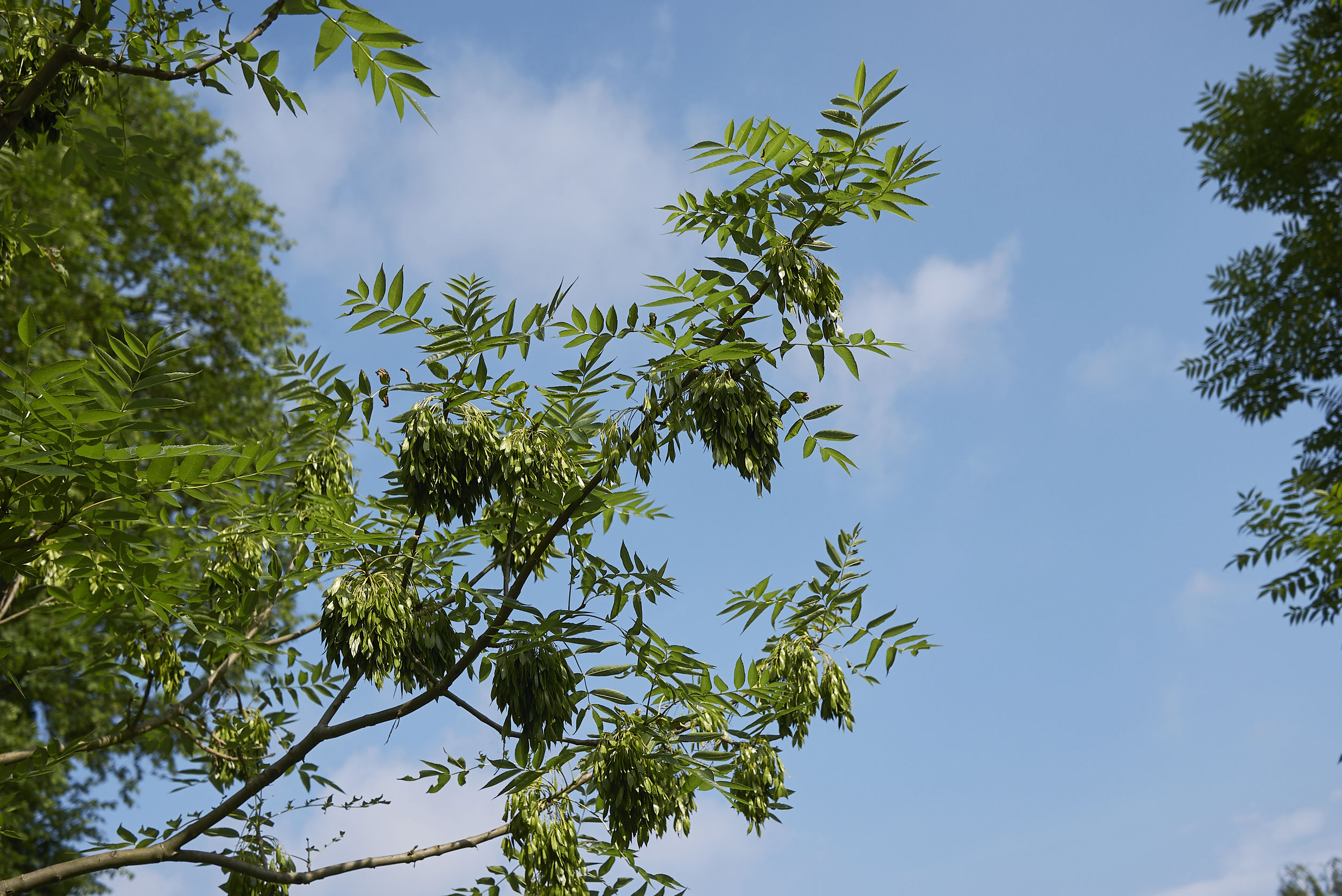 This month we look at the Common Ash! A familiar and well-loved tree known for its pale-grey bark and clusters of seeds. Sadly, these beautiful trees are being destroyed by a disease called Ash Dieback, which is caused by a non-native overseas fungus...

A familiar and well-loved tree, the Ash is known for its pale-grey bark which starts smooth but becomes fissured and gnarled over time. Commonly found throughout the UK and Europe, Ash is the third most common tree in Britain, as they love to grow in our base-rich or clay soils. They can usually be found growing together in a cluster to create a leafy canopy, and you will find them easy to recognise due to their velvety, greenish-black buds and pinnate leaves, which grow in 3 – 6 opposite pairs.

If you were to stop and watch an Ash tree over a long period of time, you’ll notice that the leaves move in the direction of the sun, and sometimes the whole crown of the tree may lean in one direction towards the light. Unlike the majority of other trees in autumn, the leaves fall when they are still green.

In early Spring, these trees produce dainty, purple flowers, just before their leaves appear. Individual trees can have either male or female flowers, or sometimes exclusively having one of each or may change from year to year. 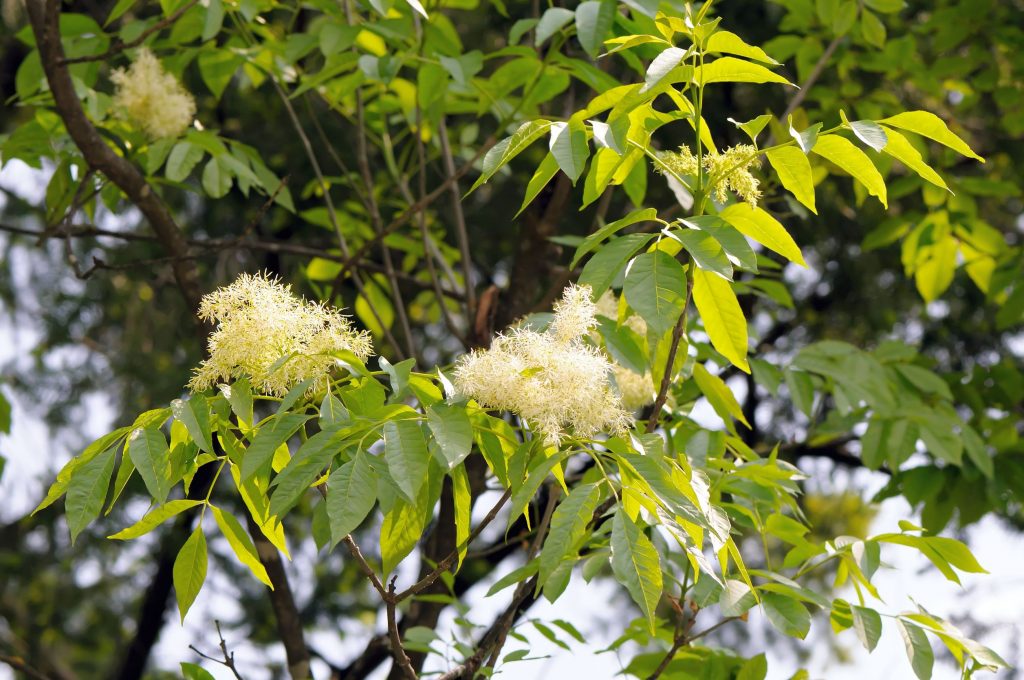 Once the female flowers have been pollinated by the wind, they develop into conspicuous winged fruits, or ‘keys’, in late summer and autumn. The keys fade into a brown shade and fall from the tree in winter and early spring, before being dispersed by birds and woodland mammals. 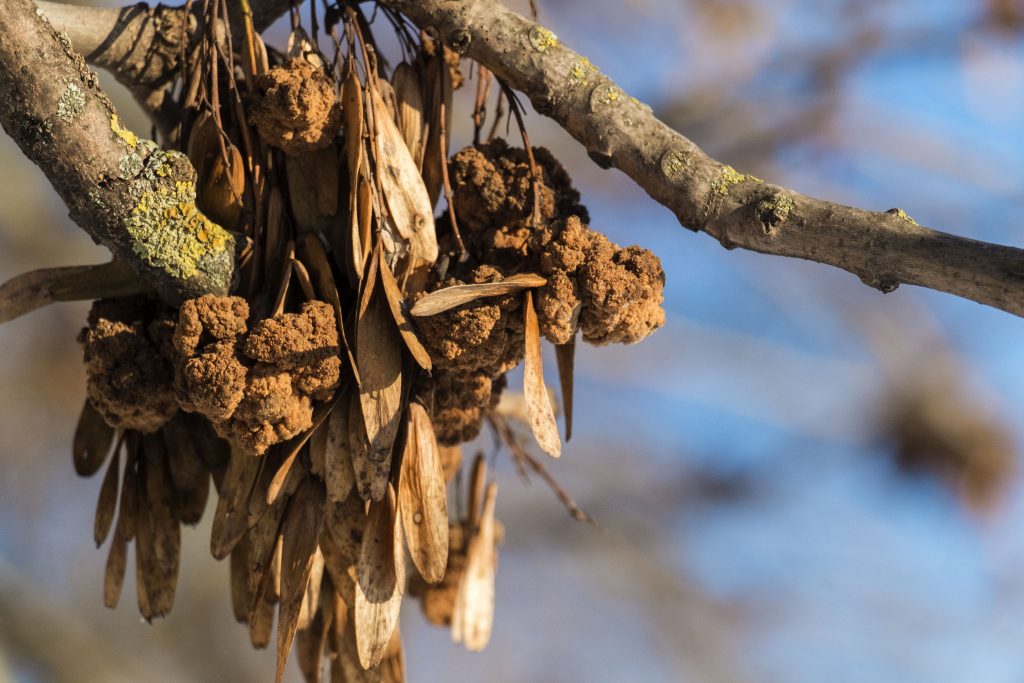 A mythical tree steeped in symbolism

The Ash tree was a very dominant feature in Norse mythology, which was referred to as the ‘Tree of Life’ and can still be found featured in art, metalwork and jewellery designs today. The tough and ruthless Vikings believe that that the first man on earth came from Yggdrasil, an eternally green Ash tree growing in Asgard, with branches that stretched out over all the nine worlds and up to the heavens. A squirrel named Ratatosk was said to spend his days running up and down the Ash tree, spreading gossip between the different worlds.

In Ireland, the Ash was known as one three sacred trees, along with the Oak and Hawthorn. It is said that St Patrick banished the snakes from Ireland with an Ash stick, which, in Irish mythology, was the ideal wood for magic wands because of its straight grain. Ash was thought to have power over water and was often planted near sacred springs known as ‘cloothe wells’. Irish emigrants to America even took small token Ash branches with them on their voyage, as a charm to protect them against drowning. The Ash’s relation to water goes back centuries; in Ancient Greek mythology, the tree was associated with Poseidon, the god of the sea. 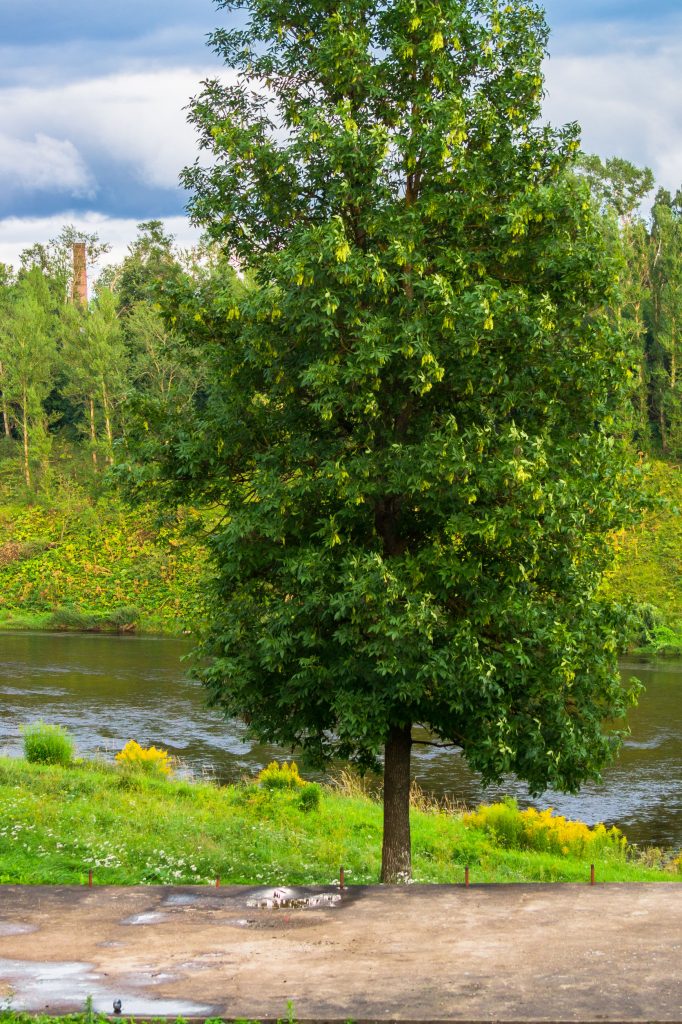 The bark, seeds and leaves of the Ash are believed to have considerable healing properties. Ash bark is a disinfectant and was used to clean wounds before antiseptics were available. Throughout the years, Ash has been thought to strengthen the spleen and liver, cleanse the system and detoxify the body. The green, immature seeds of an Ash tree are edible and are still used in herbal medicine.

The impending threat of Ash Dieback

Sadly, our Ash trees are at great risk from a worrying disease called Ash Dieback, also known as Chalara Dieback. Caused by a non-native overseas fungus, Ash Dieback is now found throughout the south-east but it is spreading, and cases have been reported across the country. It is presenting a threat to our landscape on a scale not seen since the Dutch elm disease epidemic in the 1970s.

Experts believe that tens of thousands of Ash trees will be lost, potentially changing our woodlands and countryside forever. This horrid disease slowly prevents the Ash trees from taking up water, causing them to lose their leaves, their crown to die back, and usually results in their death. 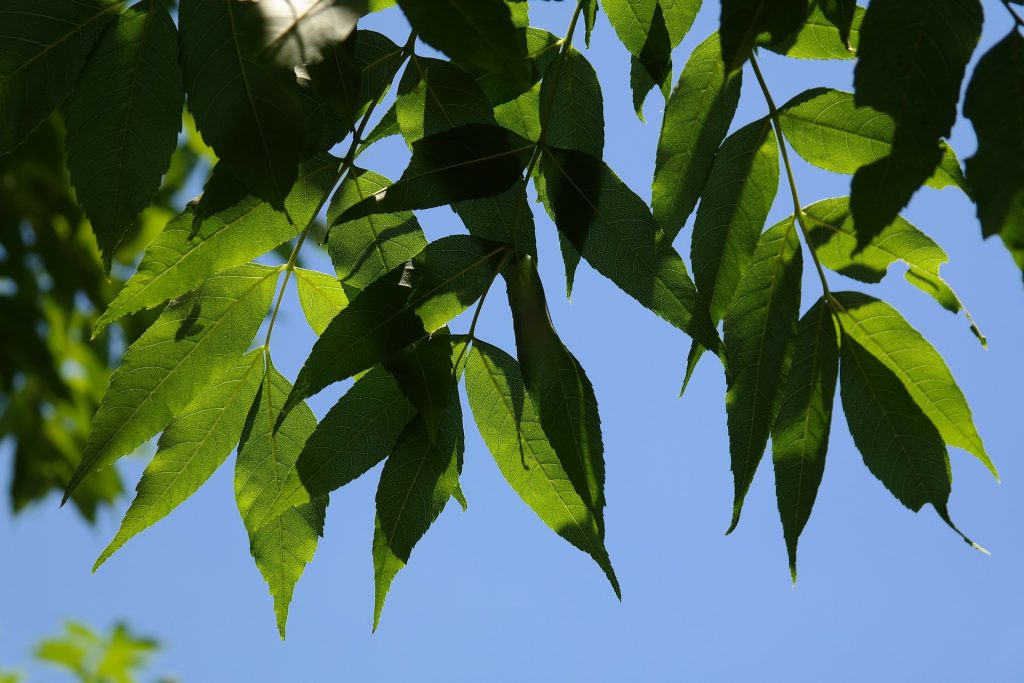 It is thought that the fungus, called Hymenoscyphus fraxineus (previously Chalara fraxinea), came to our shores from Asia, where the native trees are entirely resistant to the disease. However, our European Ash Trees have not naturally evolved with the fungus in their habitats and therefore have no resilience to it. We cannot treat the trees once infected, but we can conserve the ones that are still healthy while helping our wildlife to adapt to an environment without them.

There is some hope, however. It has been identified that some trees, which are growing in ideal conditions with plenty of space and light, may be more resistant to Ash Dieback. By retaining as many of these tolerant trees as possible, the population could eventually recover in the future. We can also improve the resilience of our woodlands against diseases by increasing the genetic diversity of species and planting a greater variety of native trees. If you are interested in finding out more, read this article from the Woodland Heritage about the documentation of Ash dieback.

Being robust, pliant, and fibrous, Ash timber is one of the toughest hardwoods that absorbs impact without splintering. Due to the meshing of fibres in the grain, it can whip and bend easily without fracturing and is ideal for steam bending techniques. It is the wood of choice for making tools and sport handles, including hammers, axes, spades, curved hockey sticks, and oars. Due to its properties, Ash was used to construct carriages in the 19th century, and it was a popular material in the early aviation industry. Britain’s Morgan Motor Company still grows Ash to make the superstructure frames for its cars. 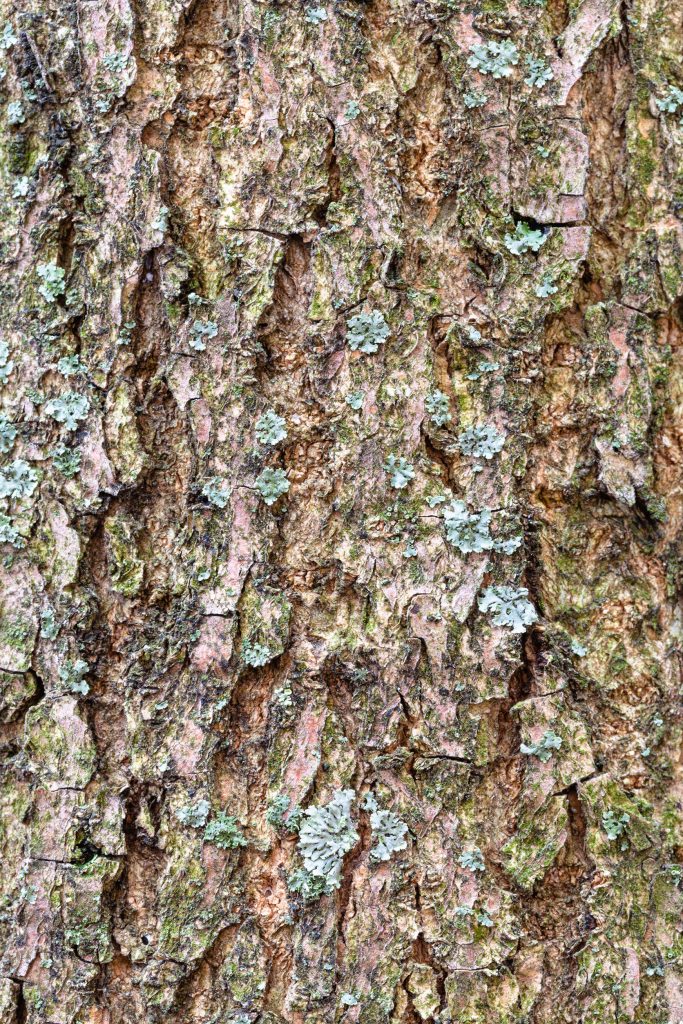 Although it has a similar grain to oak, Ash is a pale and creamy-white material that evokes style and elegance. Though you can use a stain to make ash furniture darker, this beautiful material does far better when its natural light colours are allowed to show through.

Because of its neutral shade, it pairs beautifully with cool greys and pale pinks for a calming colour scheme. Ideally, it is best to use in darker spaces where the aim is to bring brighter, lighter tones to a room. A soothing bedroom or study is an obvious choice, but it can also look spectacular in minimalist kitchens. A statement dining table or sideboard are subtle ways to bring Ash into your home, but if you want to embrace the material, then invest in flooring or wall panels.