Tree of the month: Pomegranate 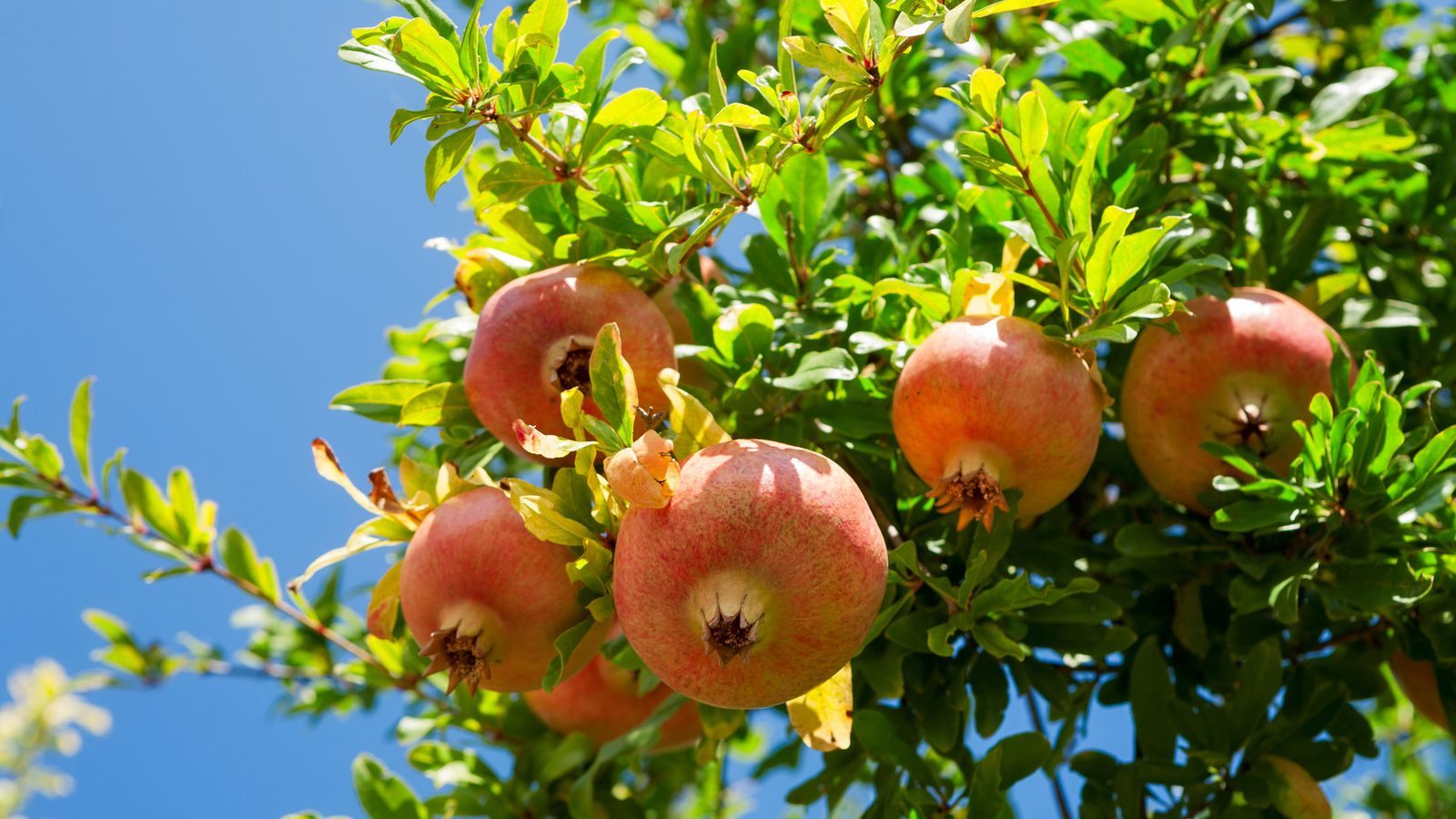 This month we look at the pomegranate! Known as the ‘Tree of Love’, we think it’s the perfect species to learn about on Valentine’s Day. Providing us with delicious fruit and strong wood, this symbolic tree has been revered across different cultures for hundreds of years…

Thanks to its tart sweetness and superfood qualities, the pomegranate fruit is a firm favourite with foodies and nutritionists alike. While the tree (punica granatum) is usually grown for its fruit, it’s easily one of the most fascinating tree species in its own right.

They’re known for having extremely long lifetimes, with some specimens found to be growing for up to two hundred years like the ones discovered in the orangery at the Palace of Versailles.

While it can be one of the oldest trees, the pomegranate will rarely reach more than 4m when cultivated, although it can grow as high as 7m in the wild. This distinctive tree has a relatively round and tall-standing trunk which is sometimes prickly at the apex, and its ageing bark will develop a grey tone with a knotted and twisted appearance. 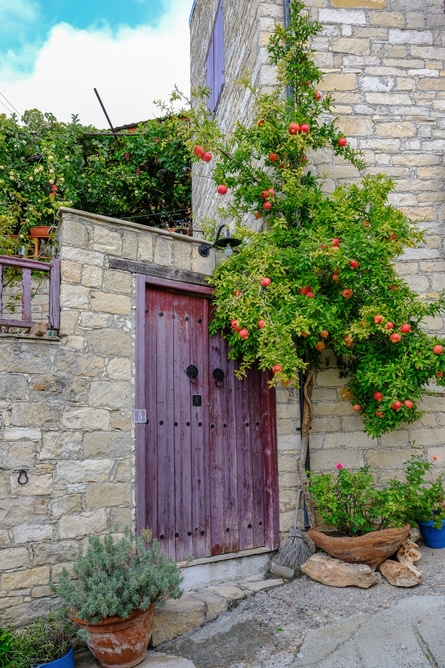 Growing amongst the branches, the fruits are smooth and round with a striking red-pink and golden skin. Inside, juice-filled arils and seeds are encased within a pale, spongy pith. Before their mouth-watering fruit begin to grow, the tree will initially bloom with beautiful red and orange flowers which usually have three to seven petals. With such vibrant blooms, some fruitless varieties of the tree are grown just for the flowers alone for ornamental purposes. 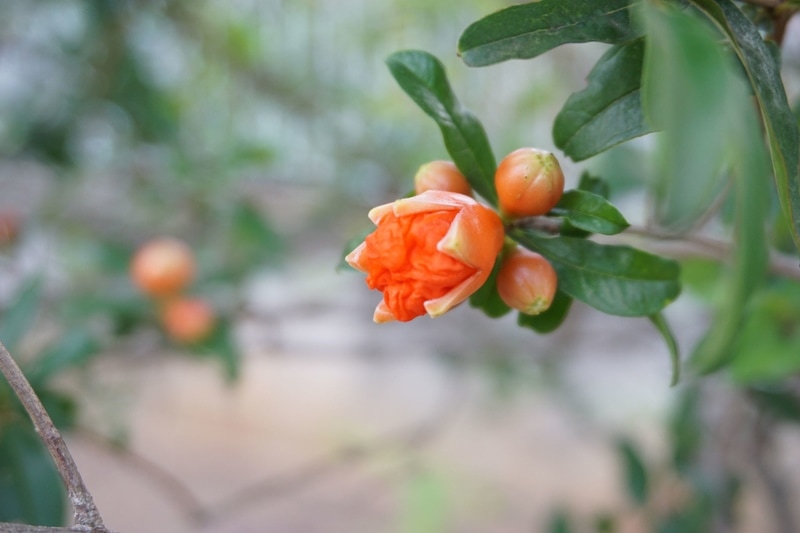 More than just a fruit tree

Due to its thin trunk, the pomegranate tree is not often harvested for its timber but interestingly it still has a range of uses. Its pale-yellow wood is very hard, and some woodcrafters use it to make decorative walking-sticks, small cooking utensils and ornamental bowls. 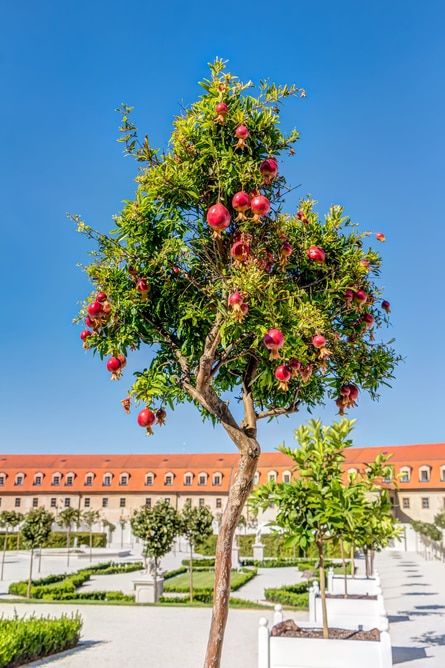 The tannin-rich bark of the pomegranate tree was traditionally used to cure leather in Morocco, and in Japan they still use it to produce insecticide. A black, permanent ink can be made by steeping and fermenting the leaves in vinegar, perhaps ideal for the ultimate hand-written love note on Valentine’s Day?

While they are packed with delicate, edible seeds, the skin and pith of the fruit cannot be eaten as their high acid content makes them bitter. They are a popular active ingredient to use in cosmetic skin care products however, and they can also be used to make yellow and green dyes for fabric. 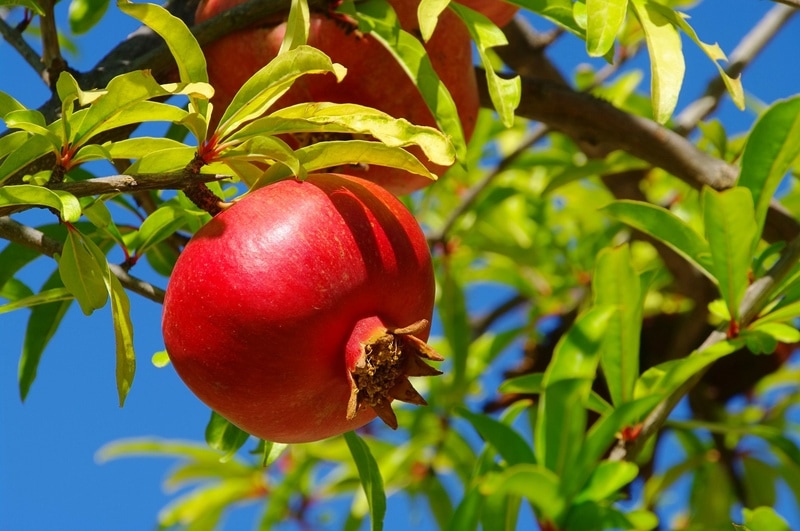 Treasures from the past

The pomegranate is one of the many fruit trees whose cultivation is so ancient that the date of its origins is shrouded in mystery, but historians know that it is native to the lands that run between Iran to the northern Himalayas. In hot and dry countries, trees that produce sweet fruit such as pomegranates, lemons or dates are inevitably prized for their intense flavours. Bursting with juice, pomegranates would have been a valuable commodity for hundreds of years, carried to new countries by desert caravans along with other treasures such as spices or gold. 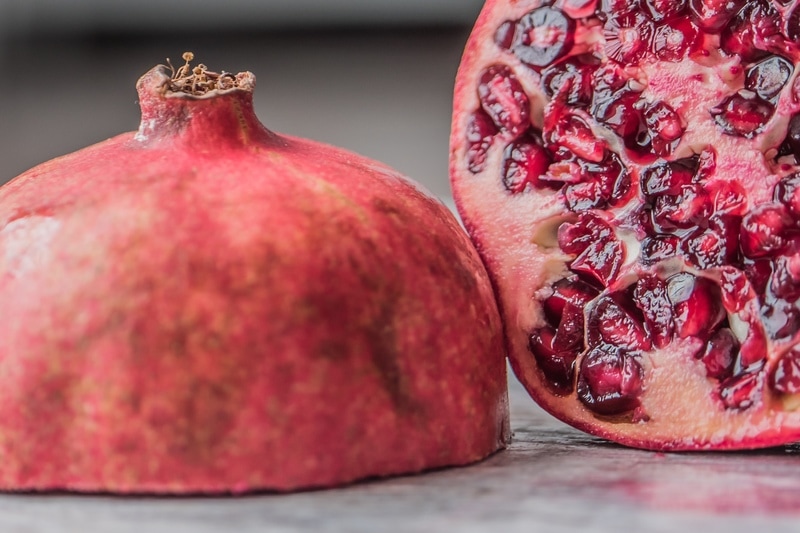 In the 1980’s deep sea divers discovered a cargo of pomegranates while excavating the wreck of The Uluburun, a trading ship that sank while sailing from Palestine to Egypt in the late Bronze Age. Over time the tree eventually spread to other countries including Egypt, China, Bangladesh, India, Burma and Saudi Arabia, making it a significant species on a global level. The pomegranate finally made its way to western countries in the 1500s when the Spanish brought them to the new lands of America. Today, demand for the fruit sees the tree grown commercially in huge quantities, particularly in California. 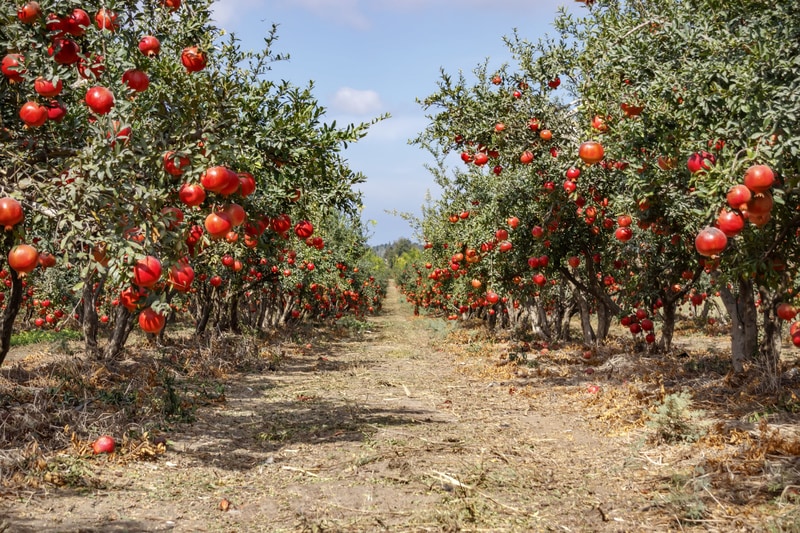 References to this timeless tree can be found throughout ancient history. This fruit-laden tree has represented many concepts and meanings over thousands of years; symbolising everything from abundance and fertile land to feminine beauty and the afterlife.

Its appeal goes back as far as 3500 BC, where the ancient Queen Kubaba of modern-day Iraq is shown raising a mirror and a pomegranate above her head, engraved forever into stone wall carvings. Murals of painted pomegranates on the walls of Egyptian tombs have been discovered and even King Tutankhamun was buried with pomegranate-shaped objects and treasures. 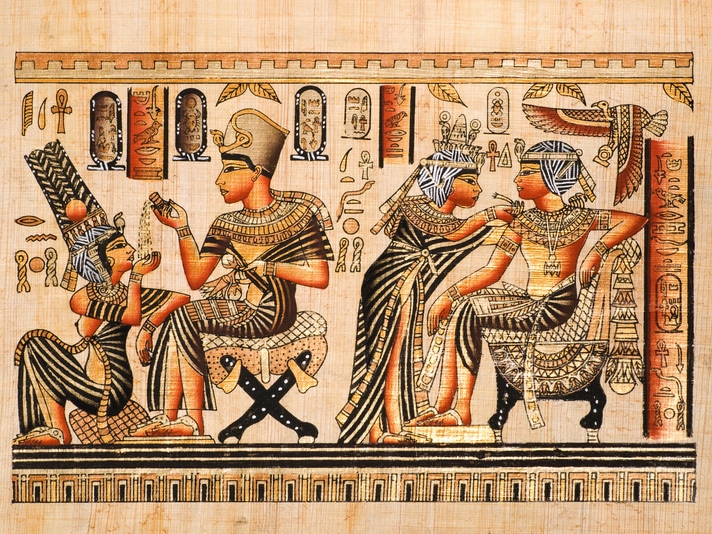 Indian sculptures of the Hindi god Ganesha show him dancing with a pomegranate in his hand, and the fruits are also referenced in the Bible. Right through to modern times, the fruit can be found in cultural masterpieces by Botticelli, Shakespeare and Dalí.

One prominent story from Greek mythology tells of Persephone, the goddess who was abducted by Hades and forced to marry him in the underworld. Her mother Demeter, the goddess of harvest, refuses to let anything on earth grow or flourish in her daughter’s absence so Zeus forces Hades to allow Persephone to return after people begin to starve. 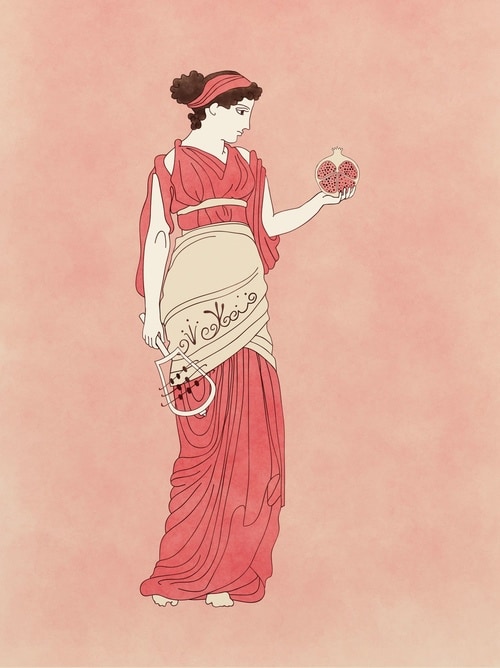 Before she leaves, Hades tricks Persephone into eating four pomegranate seeds grown in the underworld, forcing her to return for four months every year. Each time she goes back her mother stops the plants and trees from growing, which is how the ancient Greeks explained the barren winter months.

Grow your own pomegranate tree

Green-fingered gardeners in the UK can put their horticultural skills to the test and grow this hardy, heat-loving tree indoors in a pot or container. It needs lots of sun to grow so put them near a bright window. 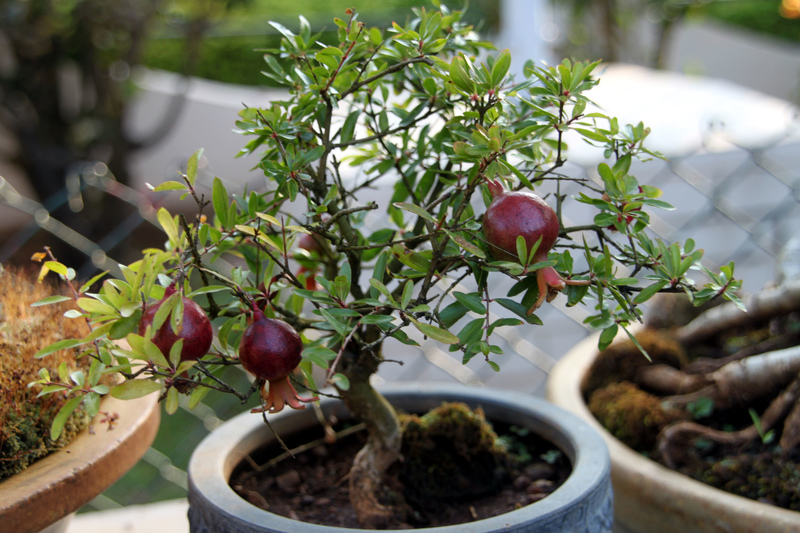 A pomegranate tree can be kept indoors for the winter and then positioned outdoors in the sunshine during the summer months, but if temperatures drop then bring it back inside. The pomegranate is self-pollinating so you only need one plant to produce fruit and if looked after properly your tree will provide you with a harvest within the second year.

King Henry IV of France had a principle that he tried to rule by; “sour, yet sweet.” He believed a king should balance stern leadership with empathy and you guessed it, he wore an emblem with a pomegranate. Sweet and sour is certainly an accurate description for the pink, tart fruit which will bring a delicate balance of flavour to any culinary dish. 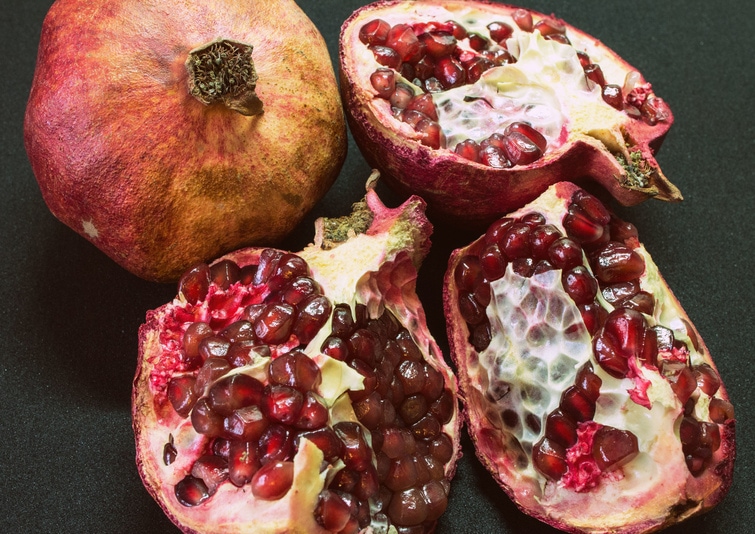 As well as their sweetness, they are bursting with goodness and have three times as many antioxidants as green tea. The fact that pomegranates are a nutritious superfood packed with fibre and vitamins adds to their appeal, making them exceptionally popular among the health conscious.

Their versatility makes them a great ingredient to use for both sweet and savoury recipes. Look for fruits with unblemished skins which feel heavy as these are often the juiciest. For a sweet treat, this gluten-free chocolate chip, hazelnut & pomegranate cake by Izzy Hossack would be perfect served with a coffee. For a healthy lunch, this filling cauliflower, pomegranate and pistachio salad will really delight the taste buds. Looking to impress your loved ones on Valentine’s Day? We love these pearly-pink pomegranate and rosemary gin fizz cocktails.