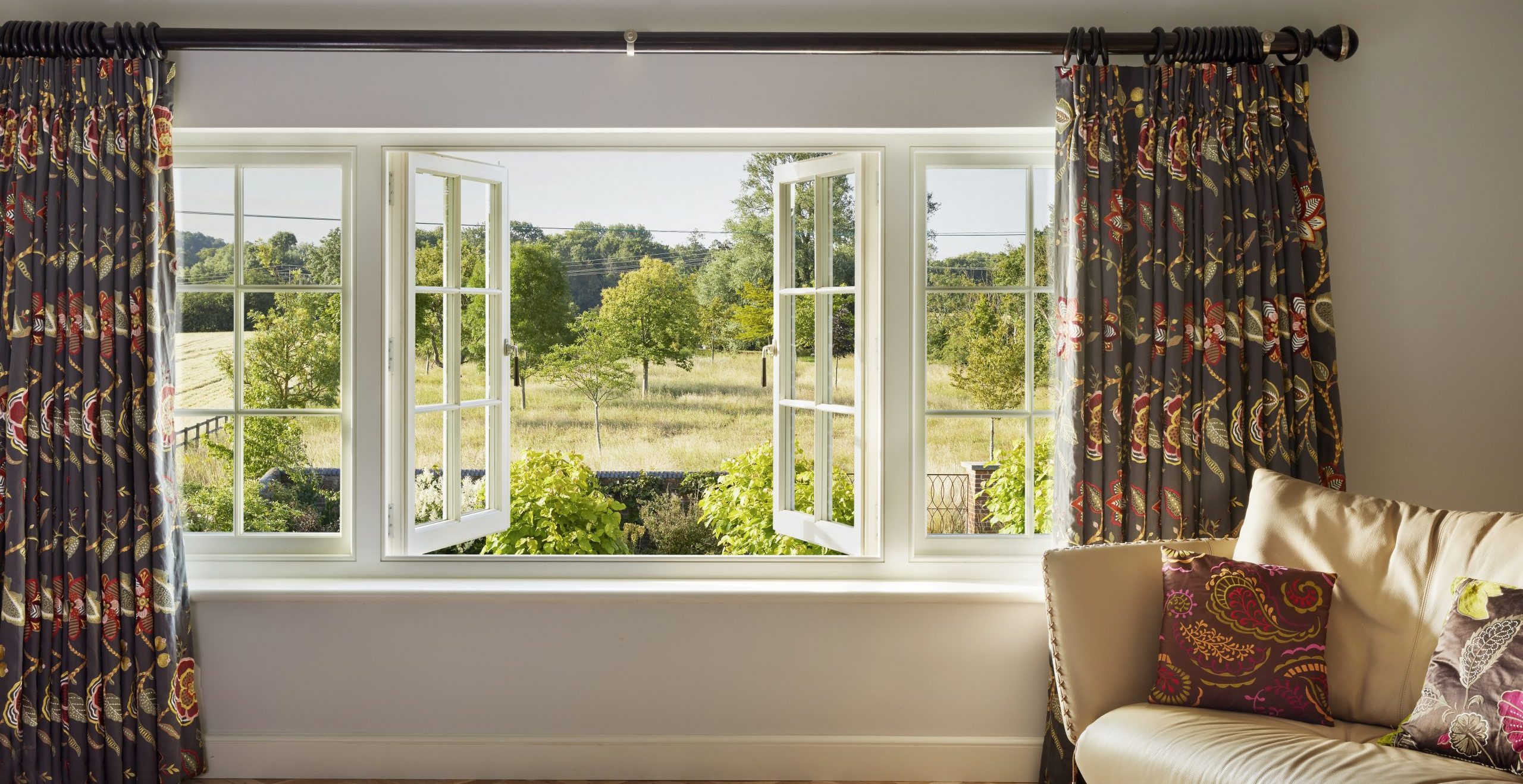 If you’re looking for a timeless and elegant window that will let ample natural light and fresh air into your home, then a French window could be a great option. With an ancient heritage and a wonderful ability to bring completely unobstructed views to your home, we explore this fascinating window design in more detail…

Contents (tap to jump to section)

The French window is often mistakenly thought to have originated from 16th Century France, an artistic design from the Renaissance Era. However, it wasn’t from France at all; The style was a product of Italian renaissance architecture – and if you go further back, you could even say they are Roman or Greek.

In the 1490s, floor-to-ceiling Palladian windows flanked by sidelights and fanlights were popular across Italy. Architects couldn’t get enough of the generously sized windows that could double up as doors and lead out onto Juliette balconies, and that helped to maximise the light and ventilation in the building. However, following a war between France and Italy, they later received the name we use today.

When the French took victory in the war, they returned home with a range of Italian artworks and architectural influences. Later, French Architects were applying Italian design principles of symmetry, proportion, and geometry to their buildings. Everything, including windows, was influenced by the new trend. But perhaps none more popular than what later became known as the ‘French Window’.

The French gave the design their twist by embedding numerous window panes into the structure held by mullions. The way the classically proportioned windows brought light into a room and gave accessibility to balcony areas made them an instant hit, and the concept was used widely during the Baroque era. French windows soon became doors in their own right, used both externally and internally for separating rooms.

They were originally made from wood and iron. Though they are available in many different materials today, a traditional product champions classical beauty and heritage in a way that uPVC and aluminium just can’t compete with. By using a sustainable, high-performance engineered timber like Accoya® you can ensure that your French windows will maintain their quality finish for years to come, and will also require less maintenance. Accoya® is a water-resistant material that doesn’t swell or shrink, meaning that there is little to no movement in the joints. Find out more about this environmentally friendly material here.

Like many different architectural elements of the Renaissance, The French window eventually found its way travelling to Great Britain a century later and has been in fashion here ever since.

What are French windows called in France?

In France, they’re known as portes-fenêtres, which means ‘windowed doors’ or ‘door-sized windows’. As the translation suggests, some French windows can be tall enough to walk through, like a door. Just like a French Door, they operate by making use of a primary and secondary leaf, so that both casement sashes can be opened. A true French window, however, is much narrower than more doors and tends to have more elegant proportions.

What is considered a French window?

While French windows are similar to standard casement windows, which are attached by a hinge to the window frame on one side only, they don’t have a central post or mullion. They are a type of flying (or floating) mullion window. This means that they create one large opening, without any structural elements obstructing the view from the window. For this reason, some of the taller French windows allow you to walk through them like a door, but they are still classed as a window. They can be fitted with an espagnolette locking system, with a handle to each opener.

Where is a French window used?

They are used just about anywhere. Taller French windows are ideal for ground floor rooms that open out to the garden, for convenient access in the summer or when a French door is too big to appropriately fit into a space on the ground floor as less timber is used. Or upper floor levels with Juliette balconies that invite the romantic style of an elegant French window.

You may even find them as dormer windows on the upper floors of a property, where the views are the most impressive. French windows can also be an ideal solution for first-floor windows where the opening isn’t large enough to meet fire escape regulations.

It’s easy to assume that due to their vast history and widespread use during the 16th century, that French windows may be reaching the end of their popularity. However, these windows remain ever in demand. One of the reasons why this style has consistently proven a desirable choice amongst homeowners is largely down to its elegant aesthetic and beautiful proportions. Making them always a classic choice. But also, their ability to open a space up to nature and wonderfully frame a landscape, without obstruction by a central mullion.

With a French window, you can always be sure of its timeless beauty and its ability to transform the look and feel of a home.

What’s the difference between French doors, and French windows?

Interestingly, many people think that a French door and a French window are the same things, and it would be easy to see why, but there are some subtle differences. Not only do French windows tend to be narrower than French doors. They also may have a sill or frame below the window. Raising it above ground level. Whereas a door will always finish much lower, with a threshold at the bottom, to remove any trip hazards and provide a seamless flow outdoors as per their function.

Another obvious difference between French doors and French windows is the locking mechanism. A French door or patio door will include door handles, which require the stiles to be wider to accommodate. However, a large French window will have a window mechanism, such as espagnolettes, which can sit on a smaller stile.

If you look at the two sketches above, you’ll see the difference between a French door (left) and a French window (right). You’ll notice that if a French door is incorrectly used in a space that should only accommodate a French window, the result can be clunky and disproportioned.

This is due to a French door having higher proportions of bulk and frame, which can obstruct the view if shoe-horned into a space incorrectly. It loses the delicate and romanticised aesthetic of a traditional French window.

It’s very common to see a French door design incorrectly used on Juliette balconies, where a French window is more suitable to maximise views. However, if the opening was to be made wider, for example around 1900mm, then a pair of French doors would better suit the proportions. The sketch to the right-hand side shows how a French window should be designed, with narrow frames and fewer obstructions to result in a timeless and elegant look.

Westbury Windows and Joinery is a FENSA registered company and has been designing and supplying bespoke joinery to homeowners and specifiers for over 25 years, using expert design knowledge and understanding to help you choose the right products. If you’d like to discuss your requirements with a consultant or request a brochure, get in touch today.