Window to the world: Neuschwanstein 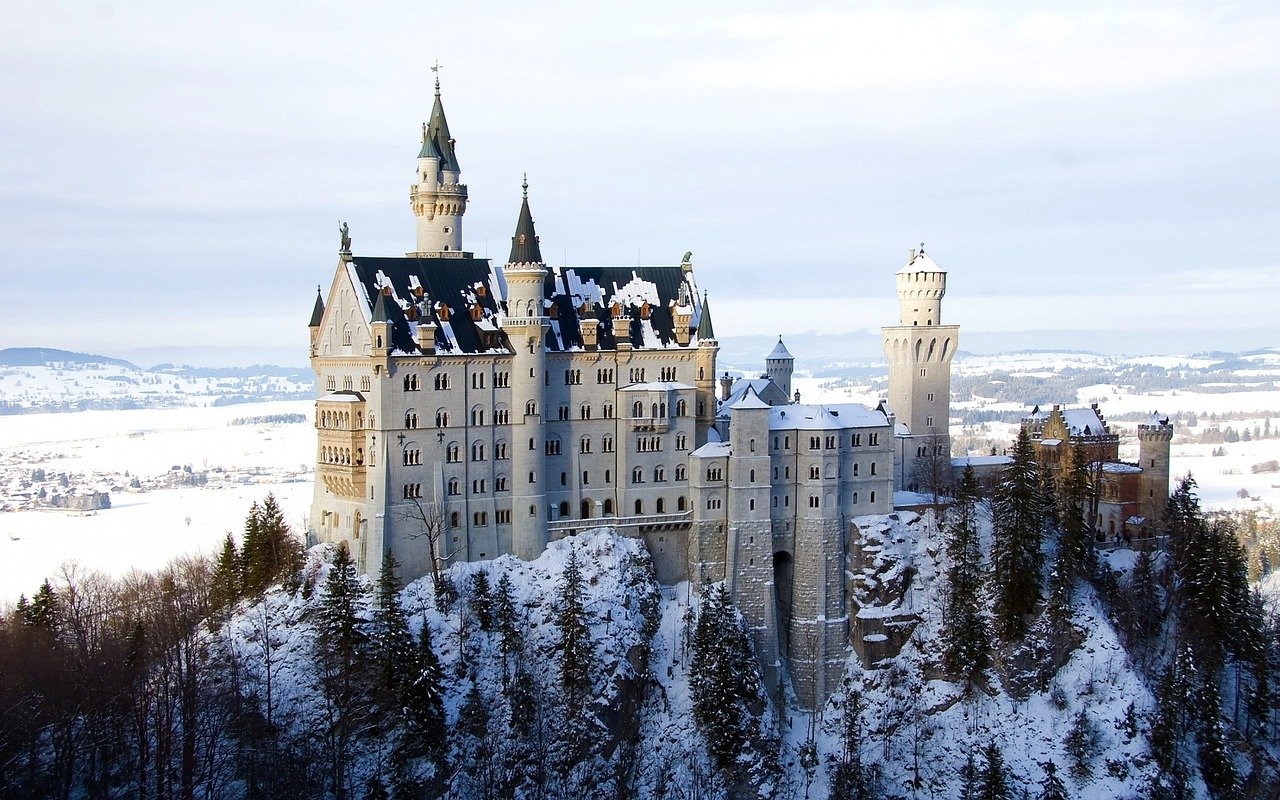 Forget the Christmas markets of Berlin and Cologne! For a unique winter getaway consider Southern Germany instead. Between the ski slopes of the Zugspitze, the thermal baths on Lake Constance and the world-famous wines and beers, South Germany offers something for everyone, with Magical Neuschwanstein Castle being its star attraction.

You may have never heard of Neuschwanstein, but you will have almost certainly seen a picture of it, and you’ve definitely seen its likeness. Neuschwanstein Castle near the village of Schwangau, Bavaria, is the 19th-century Romanesque palace upon which Walt Disney based the castle in his 1950 animation Cinderella. Neuschwanstein was an obvious source of inspiration for the classic Cinderella fairy tale. Built by Ludwig II of Bavaria, who was himself nicknamed The Fairy-tale King, the castle was styled in the German Romantic fashion. Driven by an obsession for Richard Wagner’s operas and the German Mythology behind them, Ludwig opted to use a stage designer, rather than an architect, to design the palace. This unusual approach is why the castle, perched in the wooded foothill of the alps, looks like it’s tumbled out of a children’s fantasy book. In fact, it was used for a set in the classic family film, Chitty Chitty Bang Bang. The castle itself is not accessible by car, but horses and carriages are available all year round to let visitors live their own fairy tale, and more importantly, convey them up the hill.

Close to Neuschwanstein is the equally beautiful, but less extravagant, Schloss Hohenschwangau. Originally built in the 12th-century, the building was reconstructed in the Neo-gothic style in the 19th century. It was here that Ludwig spent his childhood and where he first met Wagner. Visitors will often come to see the two castles in conjunction during their stay. Neuschwanstein is the jewel in the crown of the Romantiche Strasse (Romantic Road). This 350 km (218 Miles) route was conceived in the 1950s and is the most popular holiday route through Germany stretching from Wurzburg; a city famous for The Residenz a UNESCO world heritage site and Franconian wine, to Fussen near Neuschwanstein close to the Austrian border.

Running past two dozen towns and cities, through stunning hills and past epic castles, it is a breath-taking way to take in Bavaria. A highlight along the route includes Rothenburg ob der Tauber; a medieval town of cobbled streets, lined with picturesque houses, nestled on top of a hill offering stunning views of the Tauber valley. Further south from Wurzburg and Rothenburg, Augsburg is well worth a visit. Augsburg is one of the oldest cities in Germany, founded by Drusus and Tiberius (later the Emperor Tiberius) in honour of their stepfather the Roman Emperor Augustus. Having borne witness to 2000 years of history, it’s a meeting of architectural styles and relaxed attitude make Augsburg an attractive option for a base along the Romantic Road. However, if a road trip holiday sounds too stressful, you can explore the region closer to Neuschwanstein.

To the south of Schwangau, the hills rise up into the stunning German alps. Its highest peak, Zugspitze lies on the German-Austrian Border and on a clear day one can see four countries (German, Austria, Lichtenstein and Switzerland) from its 2962m peak. One can reach the peak by taking the cogwheel train (Zahnradbahn) from the Ski resort Garmisch-Partenkirchen to Eibsee – one of the most beautiful lakes in Germany, from there a cable car will take you to the summit. From the summit, you can then take another cable car to the Zugspitze glacier and return to Garmisch-Partenkirchen on the cogwheel train. Garmisch-Partenkirchen itself is a popular ski resort that was formed when two towns united for the 1936 winter Olympics. The two towns have distinct personalities, with Partenkirchen retaining its traditional Bavarian charm, while Garmisch is more fashionable and is still a top winter destination for Europe’s socialites and aristocracy.

For something a little more relaxing, take a trip further to the west to Lake Constance, (Bodensee in German). Thanks to the geology of the area, there are plenty of natural thermal spas on the Lake Constance shoreline. If you’re looking for a winter break to let the body and mind relax, what could be better after exploring hill-top palaces, than soaking in a 34°C thermal bath full of natural minerals whilst enjoying spectacular panoramic views of the lake and snow-capped mountains? How to get to Neuschwanstein

Situated right on the southern German border, Neuschwanstein and the surrounding area is easily accessible from Munich, Innsbruck in Austria and Zurich in Switzerland (130 km, 114 km and 230 km respectively) – all of which have international airports.

From the renowned beer halls of Munich to shopping along the exclusive Bahnhofstrasse in Zurich, or enjoying the elaborate imperial architecture of Innsbruck, there’s so much to do. A visit to one or more of the three cities can complement your trip to Neuschwanstein in a way that will make your winter trip to Southern Germany a truly unique experience.